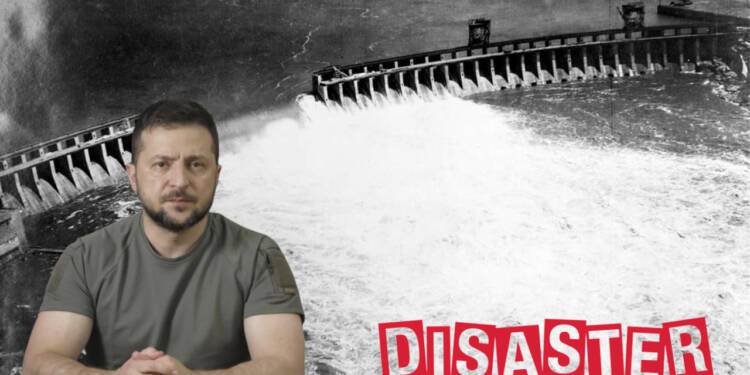 The notorious brain of Ukrainian President Volodymyr Zelensky creates blood-thirsty ideas every other day. After pushing his country and innocent Ukrainians into a grave crisis, attention-thirsty Zelensky is planning to carry out an economic and social genocide of his own people.

He is on the verge of taking a catastrophic step. A step that will sink Ukraine’s economy forever and its civilisation with it. Ukrainian armed forces are operating against all the rules of war against Russia. They have violated every Geneva convention and international humanitarian law that exists on the planet.

Zelensky and the Ukrainian regime are so blinded by the fantasy of victory that they are killing the same Ukrainians they vowed to protect in the first place. The same people whom they claim to be fighting the war for.

Ukrainians to attack the hydroelectric dam

As the brutal Zelensky government continues to disregard international humanitarian laws, Russian authorities have expanded the relocation of citizens from frontline regions in Kherson Region to a 15-kilometer (9.3-mile) zone on the eastern bank of the Dnieper River.

According to present acting regional governor Vladimir Saldo, people will be evacuated to neighbouring Russian regions or to areas of Kherson that are farther from the front lines. The urgent action, according to Saldo, will protect residents from Kyiv’s “banned methods of war” and the possibility that Ukrainian forces could launch missiles at a dam at the Kakhovka hydropower plant, which is upstream from Kherson, perhaps creating a situation of a devastating flood. He added that the action will also improve the region’s defence against a northward Ukrainian attack.

Kherson region was annexed by Russia after the referendum it held a month ago. Russia has full control of the Oblast at the moment. However, the Ukrainian counter-offensive is relentlessly aiming to target Kherson citizens. Kherson is being targeted by Ukraine because it would also open the gateway towards Crimea.

Since it doesn’t have the means for a well-fought war against Russia, it has resorted to criminality against the same people it claims to be its own. In August, Amnesty exposed how Ukraine was endangering civilians by basing themselves in residential buildings, schools and hospitals.

Amnesty listed incidents in which Ukrainian forces appeared to have exposed civilians to danger in 19 towns and villages in the Kharkiv, Donbas, and Mykolayiv regions. The report exposed Zelensky and his precarious regime, which had so far presented itself in pious and saintly light. Not only this, but United Nations has also given evidence of abuses and war crimes committed by Ukraine.

With the attack on Kakhovka dam, Ukraine will violate another Geneva convention. If Ukrainian forces blow up this dam, more than 80 towns, including Kherson, will come into the zone of rapid flooding. It’ll threaten the livelihoods of hundreds of thousands of people. And it is quite predictable that Ukraine after mining the dam will blame Russia for the attack. Consequently, whatever Ukraine propagates will be considered as “the absolute truth” by the Western media. But, Russia has no reason to do so as it already sits comfortably in Kherson. However, it’d be blamed like it was blamed for the Crimean bridge bombing and the Nord Stream pipelines episode by the western media.

The collapse of the dam might cause a massive area to flood and rob the south of Ukraine of its water supplies. It might also put Zaporizhzhia Nuclear Power Plant in jeopardy. Nuclear experts warned that while this scenario would be unpleasant and dangerous, its effects probably wouldn’t be felt right away, but surely in the near future.

Also Read: Woah!! Russia is set to get richer by $12 trillion in the next few years

Furthermore, the regions which have been annexed by Russia, are the key to Ukraine’s natural resources, including energy and mineral deposits. Based on the Washington Post’s study of 2,209 deposits, Moscow controls 63% of Ukraine’s coal, 11% of its oil, 20% of its natural gas, 42% of its metals and 33% of its rare earths, including key minerals like lithium. Washington Post had estimated that about 30 billion tons of hard coal deposits worth $11.9 trillion (almost $12 trillion) are in Russian-controlled parts of Ukraine.

But once the region is flooded, it’ll lead to a crisis which will also put the mineral deposits out of the scenario for the time being. Zelensky’s disregard for human life is leading him to commit extreme and deadly acts on his own citizens. Zelensky has realised that the small victories in the counter-offensive aren’t sustainable and he needs to do something substantial to remain in the spotlight. Therefore, he has decided to carry out an economic genocide in Ukraine on his own people.