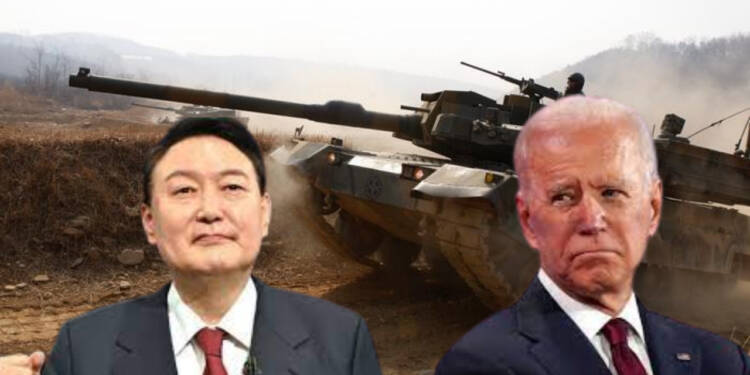 It’s a well-known fact that wars across the world and the resulting military spending have benefited the American economy. And therefore, the US first ignites war against nations and then proceeds to sell weapons to both of them.

Take, for example, it sells weapons to both India and Pakistan, two arch-enemies. But, a new country is entering into the global arms trade. And that’s awful news for American Military-Industrial Complex.

It’s none other than US ally South Korea.

As Seoul strives to increase its presence in the global arms trade, South Korea is signing multibillion-dollar defence contracts in Europe. And it’s making the American defence industry uneasy.

In the past five years, South Korean defence companies have sold small arms and mobile howitzers to a number of nations in Europe. However, such agreements pale in comparison to the record-breaking $5.8 billion pact Poland inked with two South Korean firms in July.

48 FA-50 fighter jets, 672 K9 self-propelled howitzers, and 980 K2 Black Panther tanks were all included in the arrangement, and some tank and howitzer deliveries are anticipated to start before the end of the year. If all of the options are exercised in the upcoming years, the deals might be worth up to $15 billion.

Since South Korea and the United States are anticipated to fight alongside one another in any battle with China, South Korea’s military sector has long produced weaponry and equipment that is interoperable with American gear. Because of its familiarity, it is a desirable alternative for NATO nations seeking a speedy and reasonably priced rearmament.

In August, President Yoon Suk-yeol stated that he wanted to make South Korea one of the top four worldwide exporters of weapons, competing with France, Russia, and the United States for international contracts. The country is currently the eighth-largest supplier of defence exports in the world, and, according to information from the Stockholm International Peace Research Institute, exports have increased by 177% between 2016 and 2021.

Defence exports climbed from $3 billion in 2020 to $7 billion in 2021, according to a report published in July by the Export-Import Bank of Korea, and are predicted to reach $10 billion for the first time this year.

The loss of market for its weapons has concerned American Military-Industrial Complex. The contracts for the rocket launchers, fighter planes, and tanks were all signed within the last three months as European capitals try to store up supplies after delivering their own weaponry to Ukraine for months.

And Eastern Europe, which typically purchases new weapons from the United States, is increasingly considering purchasing them from South Korea instead because it claims to be able to do it more quickly and for less money.

Poland who ordered rocket launchers from South Korea was earlier seeking 500 HIMARS from the US. But it decided against it as it didn’t want to wait for years to start receiving American-made weapons.

South Korean counterpart, Defense Minister Mariusz Błaszczak explained that “unfortunately due to limited industrial capabilities, it will not be possible for the equipment to be delivered in a satisfactory timeframe. Therefore, we started talks with South Korea — our proven partner.”

Another selling point is South Korea’s readiness to let the regional defence companies of the countries making the purchases participate in the manufacturing, giving customers an opportunity to develop their own exports in the future from the technology acquired.

The U.S. defence industry has taken notice of the contracts because of their enormous scale and promises of quick delivery. One industry source who works with several U.S. defence businesses said, “There is concern from U.S. industry that this won’t stop with Poland.”

The US will do anything to stop South Korea from impacting its war economy. But, till the time being, Yoon Suk-yeol has delivered a knockout to Joe Biden.