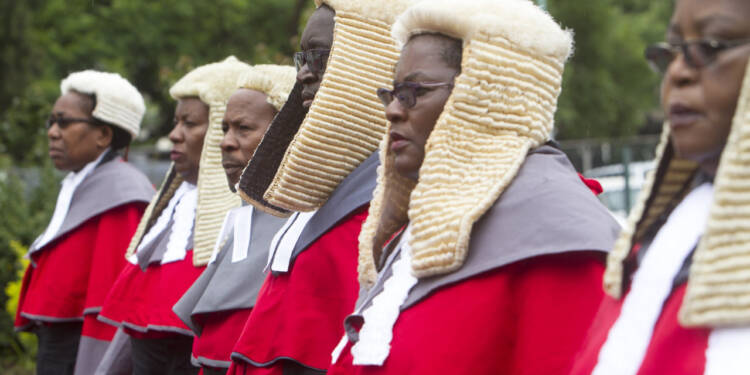 In Zimbabwe, the Judicial Service Commission (JDS), a body that oversees the functioning of the nation’s judiciary, has asked citizens’ opinions on whether judges should continue the colonial practice of wearing horse hair wigs. In Zimbabwe, judges wear blonde horse hair wigs during the proceedings.

In fact, this issue has created a controversy in the country, as people and several lawyers’ groups are angry that at a time when Zimbabwe is suffering from severe food insecurity, poverty, debt distress and mass migration for employment, the government is importing 64 wigs from Britain which is costing a USD 126,000. Many have condemned this practice as reminiscent of oppression.

In a statement, a group called Zimbabwe Lawyers for Human Rights said, “This practice must be dropped to save money that could be allocated for other necessary costs such as subsidising user fees.”

However, it must be noted here that Zimbabwe’s judicial system is actually taking a step to do away with this irrational custom. The JSC has recognised that such a practice deprives the legal system of its identity.

Zimbabwe is going to be taking several measures to reform its judiciary from the colonial influence which was oppressive as it created a structure whose main purpose is to deny the rights and freedom of citizens, safeguard the interests of the elite and ensure that a certain class is not able to access the court.

During the colonialism era, the British and other European powers established a well-organised and systematic judiciary in their colonies whose main task was to make sure that there is no hindrance in their path to plunder the resources and wealth of other countries. Colonial powers used the judiciary as an important weapon to justify their draconian intentions and legitimise their crimes.

Read more: IMF dogs growl at Nigeria as it starts freeing its economy from America’s clutches

In Zimbabwe, the British enacted laws which established an administrative structure that rested on the political and economic subjugation of people and was meant to render them helpless. It levied huge taxes, confiscated farmers’ produce, repressed dissent etc through their laws and anybody who broke them was subjected to exhausting legal proceedings.

In countries like India, the colonial regime enacted a law known as the Rowlatt Act which banned public meetings and demonstrations and was employed by the British against freedom fighters who emphasised non-violence in the backdrop of brazen British atrocities.

Therefore, the fact that in Zimbabwe such a custom is being followed is alarming but the decision by the state to get rid of this practice through democratic means i.e. by taking into account the views of the people, suggests that the state is considering several reforms in the constitution and the judicial structure. The government has incited emotions among the people that it is serious about getting Zimbabwe to abandon traditions which remind it of a dark past where civil liberties didn’t exist, discrimination was institutionalised and violence was routine.

The decision to get rid of the horsehead wig for judges must be seen in the larger context. Currently, there are concerns regarding the independence of the judiciary in Zimbabwe, which is another aspect of the colonial legacy as the judges’ job was to deliver verdicts which were meant to consolidate the hold of their masters in the country. Now, Zimbabwe was an undemocratic nation for a long time, the judges were corrupt and loyal to former president Robert Mugabe and were rewarded for delivering favourable judgements.

But now it seems that the government’s decision is positive news regarding the independence of the judiciary which will establish the faith of Zimbabweans who have witnessed and unfortunately internalised that the justice system will never pay heed to the injustice they suffered the hands of the former regime led by Mugabe.