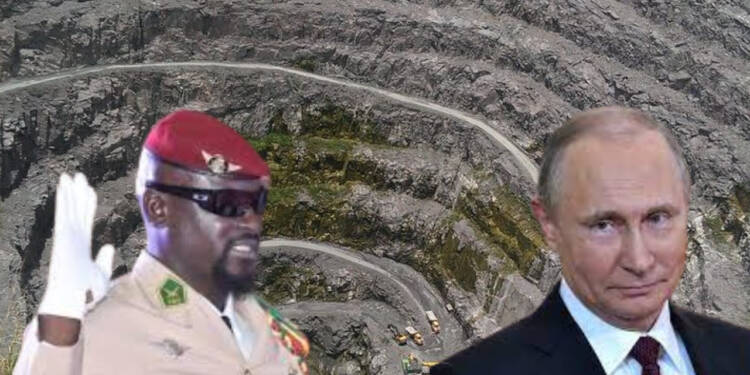 Another African country is receiving the support of the most despised nation in the world, according to the West. But the West’s efforts are once again doomed to failure since its presumed targets might be more clever than it thinks.

Guinea’s president Colonel Mamady Doumbouya visited Sierra Leone recently and met its president Julius Maada Bio. The meeting between the leaders of the two countries focused on furthering their relations.

Doumbouya said, “It is an honour for me to come and see my brother Bio, because he is the first president who came to visit us when we took power on 5 September (2021, Ed.), on 11 October President Bio was already in Conakry. That was a testimony of the friendship, the brotherhood between the Republic of Guinea and the Republic of Sierra Leone. And we will work further on this, to strengthen once again our ties of cooperation, brotherhood and friendship”.

While Bio stated, “Guinea and Sierra Leone, we are not (just) neighbours, we are so related that it is difficult to draw a boundary between us. But that is what happened after colonialism, the ‘scramble for Africa’. So we have to keep this relationship between our two countries, and basically, that’s what we are doing.”

The meeting between the leaders of Sierra Leone and Guinea and the subsequent statements implies that there is a deep friendship and understanding between the two.

It must be noted here that internationally both African nations support rival countries. We at TFI  explained how Guinea supports Russia due to which the West-funded regional body ECOWAS decided to impose sanctions on it on the orders of Biden and his allies. Guinea abstained from voting against Russia during the UN vote which called on the Kremlin to withdraw its forces from Ukraine. Whereas Sierra Leone threw its support to the agenda of the US and Europe by voting in favour of Ukraine, which demonstrates that it supports the West.

Two African leaders who back rival countries sharing the same stage suggest that there is something going on here. Was there a deal signed between Doumbouya and Bio? Has Sierra Leone asked for Guinea’s assistance in improving its adverse economic situation? We don’t know exactly what took place but the statements given by the two leaders point toward some developments.

The US and European Union imposed sanctions on Russian goods and supplies following the Russia-Ukraine war. The West targeted Russia’s economy by shutting off the supply of crucial commodities like oil, gas, food items and other necessary goods. The primary motive behind this move by Biden, Macron, Leyen and others is to destroy Russia financially so that it gets compelled to withdraw its military from Ukraine.

However, our viewers will be shocked to hear that the same Europe which is on a mission to undermine the credibility of Russia, is spreading propaganda against it and persuading other nations to stop doing business with it, didn’t impose any sanctions on diamond imports from Russia. Yes, you hear that right. Europe is importing diamonds from Russia despite its diamond industry being well-connected to the Kremlin and military, the largest diamond company Alrosa PJSC is doing business with Europe.

The Belgian government,  which actively advocates the ban on Russia’s oil and gas supply, has said that it will not stop its diamond trade with Russia. Its Prime Minister Alexander De Croo stated, “Should Belgium stop importing diamonds, the trade would move to Dubai in one day. In that case, the impact on Russia would be zero, but the impact on Europe would be very great.”

Considering its diamond trade with Europe, it is likely that Vladimir Putin has sent one of his significant allies to Sierra Leone to put forth a proposal to mine diamonds in the African country. Sierra Leone has huge deposits of diamonds, in fact, the very reason why it was embroiled in a conflict for a decade was due to its diamond. In Sierra Leone, terror and insurgent groups used to abduct civilians and made them work in diamond mines.

Now, after the end of the civil war in Sierra Leone, the nation is struggling with a sinking economy, therefore there’s a possibility that Guinea’s military junta leader Colonel Doumbouya is offering a hand of assistance on behalf of Vladimir Putin. Putin knows very well that Sierra Leone, by being on the side of Biden and his allies, will suffer massively as they will try to capture its resources which include gold, bauxite and platinum apart from diamond.

Russia doesn’t want Sierra Leone, which is one of the poorest nations in the world, to go into an unending cycle of political crisis accompanied by economic devastation. Therefore, Putin could be proposing a diamond deal to Julius Maada Bio.  Through this deal, Sierra Leone will develop its economy and come out of the shadow of the West which is intent on plundering its diamond and other wealth.