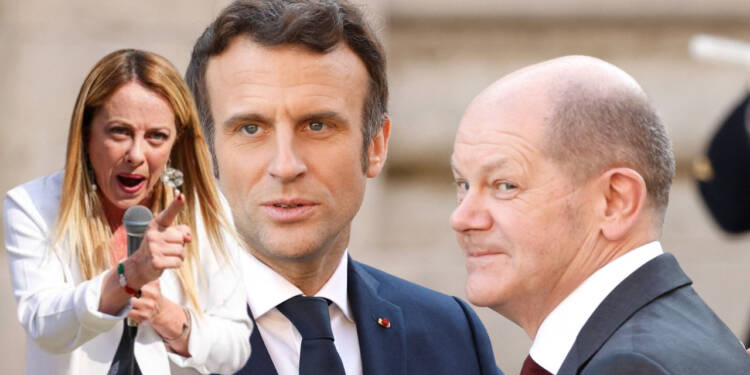 Until a month ago, the three big guns of the European Union, Italy, France and Germany had a lovey-dovey relationship with migrants. But now, one of them has openly shifted its stance and let all hell loose against the migrants. Over the years, Germany, France and Italy had an agreement with each other to stand together and aid together every migrant that is arriving at its doorsteps. But, Meloni has started backtracking on the former government’s policy on migrants

Yes, with just one move, Meloni has made Germany and France go cold-sweat as the agreement between the three nations is probably nearing its end. Since 2015, Italy, Germany and France have stood in solidarity with the migrants.  If one remembers, back in 2019, French President Emmanuel Macron met with former Italian PM, Guiseppe Conte to extend support for the migrants in the continent. Conte’s plan to disperse migrants in which the entire 28-nation bloc was entitled to automatically accept a portion of all new arrivals in Italy as soon as they were rescued, had the approval of France and Germany. But the plan didn’t work out as planned. Because of disagreements between the members, the majority of the migrants that arrived in Italy did not get distributed.

The previous pro-EU government in Italy had long complained that the other EU members are not working together and turning Italy into a dump yard. But not anymore, Italy’s new government has made it clarion to both Germany and France that Italy won’t work as a samaritan anymore.

On Saturday, two German-operated migrant rescue ships named Humanity 1 and Rise Above entered the eastern coast of Sicily carrying nearly 300 rescued migrants. One of the ships was given permission to let the most vulnerable migrants off that were children, but the entry of other ships was denied entry. On this closure, Italy’s Interior Minister Matteo Piantedosi stressed: “ Italy would allow a German migrant rescue ship to arrive in Sicily to land just minors and those with medical emergencies, the ship must then return to international waters with the rest of the migrants.”

The new Italian government has also drafted measures to curb the entry of migrants via NGOs backed by governments. Rome is stressing that these NGOs have violated procedure by not properly coordinating their rescues, thus making Italy compelled to lay the groundwork to close the ports.

France and Germany in Limbo

Though this measure is for NGOs dumping illegal migrants in Italy, the move has already frustrated Germany and France. Both Berlin and Paris are urging Italy to open a safe port to Humanity 1 and Rise Above. But, Italy has already made it clarion that the nation is no more interested in the agreement which the three-nations had signed years ago.

This sudden shift of stance due to Italy’s new government is also a sort of message for Ukrainian migrants. Italy’s new leader is insisting that countries who run these charity ships must intake the so-called ‘rescued’ migrants. In addition, Meloni made a hard-line approach on fighting illegal immigration as one of her key campaigning issues in the general election taking a dig at Ukrainian migrants who have stormed Italy. Moreover, her coalition partner, Matteo Salvini had towed a similar line against NGOs rescuing migrants at sea, making the slogan “let’s close the ports”.to

And now when in power, both Salvini and Meloni have begun to cancel the EU solidarity like never before. For Ukrainian refugees trying to join the EU through any border currently, getting into Italy is a monumental job. And this is specifically unsettling Germany and France. The good times are indeed over for migrants in Italy, and they will have no place to live soon.

Russia injects a massive booster shot into the Malian economy