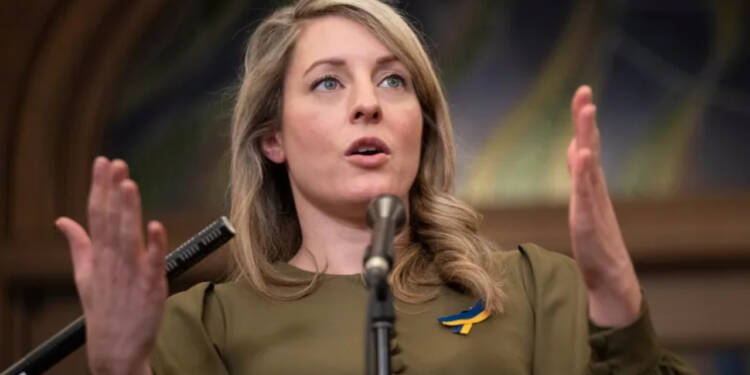 Justin Trudeau has friends like him in Canada’s top positions. People so incompetent and naive are looking after the foreign affairs of the country. We are talking about a personal friend of the PM of Canada, Minister of Foreign Affairs, Melanie Joly. “The sunniest liberal,” who has taken a series of missteps and become a butt of jokes in the past, is also the architect of Canada’s terrible foreign policy. Can you believe that?

A lady who has been the subject of embarrassment several times in the past. One who has been demoted to minor portfolios due to being out of depth almost every time is now leading Global Affairs Canada. A department managing a global network of over 175 missions in 110 countries is in her hands.

No wonder the governance of national security and intelligence in Canada is so weak. The Foreign Affairs Minister has failed to provide direction for a framework to address the concern.

A lack of direction and accountability has resulted in terrorist hostage situations for Canadians abroad. A new report has warned Global Affairs Canada to “up its game” in terms of national security and intelligence.

More than four months after it was given to the Prime Minister, the Minister of Foreign Affairs, and the Minister of National Defense for their consideration, the National Security and Intelligence Committee of Parliamentarians, composed of MPs and Senators, published a damning 105-page report.

The suggestions have not yet received a response from the federal government, but a redacted copy of the report is now online and paints a damning picture of GAC’s inadequacies. According to the report, “The Department lacks the policy, monitoring, and accountability systems that are the distinguishing characteristics of a mature security and intelligence agency.”

GAC is “a “core member of the security and intelligence community,” reads the report. “Many of Canada’s most significant national security threats – from terrorism and foreign interference to weapons of mass destruction – emanate from abroad or involve a foreign nexus.”

The committee is of the opinion that the department lacks strong governance mechanisms that would establish “a clear link between a minister’s authorities and the activities conducted under those authorities,” such as ministerial direction, formalized policies and procedures, and oversight committees.

What worries the committee, in particular, is the department’s capacity to respond to serious international situations like terrorists.

Read More: We researched about the “incompetent employees” of Global Affairs Canada. The result is deeply distressing

But, will the minister of foreign affairs, Melani Joly, take any action? Well, her past record is enough to answer that. Melanie Joly gained notoriety in Montreal after unexpectedly coming in second in the 2013 mayoral race. But she paid the price later. The price of her incompetence She had previously lost her heritage ministry to Pablo Rodriguez in the cabinet change in 2019. She was then demoted to the minor portfolios of tourism, official languages, and la Francophonie following mistakes that made her a joke in her home province. Her friend Justin Trudeau tried everything to cushion her fall but failed in doing so.

Why did the federal government trust her with such a post, and why are they letting her play with the national security of Canada? The architect of Canada’s foreign policy is too naive in her dealings. The loser in Melanie will continue to cast clouds over the country’s security as long as it remains in the driver’s seat.