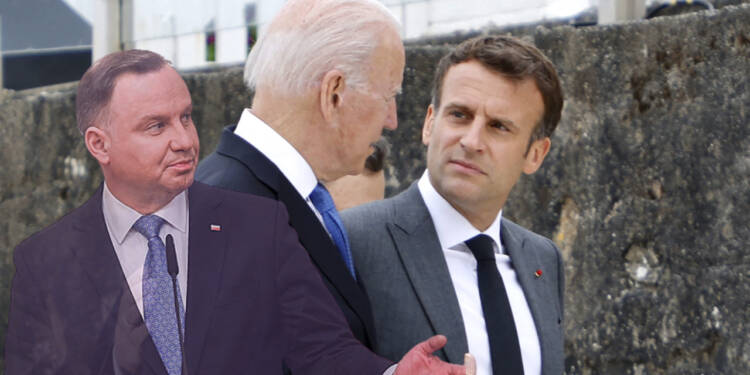 The US wants puppets to dance to its tunes and it did find a new one in Poland. Due to the country’s significant geopolitical location on the world map it got the attention of the US. Washington thought of Warsaw to be added to the list of its vassal states but alas France dashed its hopes.

We know a cold war has been brewing between France and the US. As France is ascending to levels comparable to those of the US, French President Emmanuel Macron has begun to spar with US President Joe Biden. Even France and Poland are at loggerheads within the EU. Poland has been sparking insecurity and giving sleepless nights to its European pals and guess who thought of benefitting from the situation? The United States.

Washington in a spat with nuclear power France, thought of giving the country nightmares. It thought of turning Warsaw into a nuclear power and contracted to build nuclear plants in the country. French Prime Minister Mateusz Morawiecki announced plans to build the country’s first nuclear plant after a contract with American Westinghouse company. The Warsaw government chose Westinghouse for the nuclear project, Morawiecki tweeted on Friday, praising the company for its “reliable, safe technology.”

According to reports, Westinghouse won the deal over Korea Hydro & Nuclear Power and EDF of France. However, Poland has not ruled out working with other partners on nuclear projects as a result of its decision to sign the contract with an American corporation, according to government spokesperson Piotr Müller.

Read More: Forget US-Russia, a cold Cold-war is underway between France and the US

Poland has long been a thorn in the unity of the EU. France, Germany and Italy have long used the size of their economies to bully smaller nations of the union and it seems like Poland has had enough of it. So, the country came to consensus with the US and was in a bid to outstrip France’s sole strength of being a nuclear power.

This was enough to curdle the blood of France and the left-leaning caucus of the European parliament. France is now warning Poland that the project might be blocked and is trying to dash the hopes of the US.  Left MEP and former Prime Minister Leszek Miller said, however, that the European Commission may question or even block the project because of non-compliance with EU rules.

“The EU law states that such investments require competition procedure,” Miller told Polsat News. There must be a few bidders in the tender, and they all must be treated equally. “If there is an American investor involved, the Commission has to exclude the investment from tenders, but this is possible provided the country has a valid reason,” he explained.

The Left opposition forewarned that the investment would encounter issues because it did not adhere to EU regulations. Muller made it clear that Poland wants to construct a few nuclear facilities. Two plants are among the official government proposals indicated in Poland’s multiyear energy policy. Jacek Sasin, the minister of state assets, is in Seoul right now to speak with South Korean partners for a new nuclear project.

According to Miller, Poland might placate the European Commission by claiming that the joint project with the US was just one of several planned investments in the nuclear sector and that the next one would involve investors from EU nations.

“But the government suggests that the next investor will be from South Korea, which will certainly raise questions, why Poland continues to choose foreign investors instead of the ones from the EU,” warned the opposition.

It seems that Washington’s billion dollar dream to turn Warsaw into a nuclear power is going for a toss now. The US eyed the dream of making Poland its vassal state owing to its significant geopolitical location as the country is bordered by Lithuania and Russia to the northeast, Belarus and Ukraine to the east. Poland could have been used as a pawn by the US if the fire of the war in Russia and Ukraine spread westwards. And Poland, unaware of the US’s ulterior motives just wanted to ascend France’s levels.

But, France won’t let that happen. It is warning the country to scrap the deal as it may eventually lead to nothing but the EU blocking the investment.