Forget US-Russia, a cold Cold-war is underway between France and the US

Chapter 2 of the Trade War 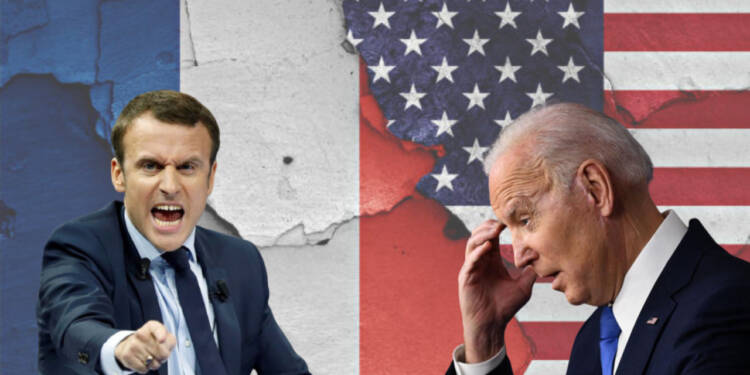 France and US Cold War : As WW2 ended, the emerging superpowers USSR and USA entangled themselves in a constant display of power. During the Cold War, there was no direct combat between American and Soviet soldiers. But the two superpowers continued to wage proxy wars against one another through political bluffing, military alliances, espionage, propaganda, armament buildups, and economic support.

But, what if we tell you that a new Cold War is brewing, not between Moscow and Washington but, between France and US. This was a far-fetched scenerio a few days ago, but now, it’s actually happening. As France is ascending to levels comparable to those of the US, French President Emmanuel Macron has begun to spar with US President Joe Biden.

Though Emmanuel Macron has never been an ardent supporter of Joe Biden, France stood beside the US during the majority of its crucial times. However, this is no longer the case since France is now openly locking horns with the USA and preparing for a cold war-style confrontation.

According to Politico, French President Emmanuel Macron has mimeographed US’ Inflation Reduction Act. France is set to launch an experimental, subsidized leasing scheme for low-income consumers to buy electric vehicles for €100 per month.

The French President has stressed that the mechanism will favor customers to adopt French and European cars in a feasible manner. The French president also announced that the government will top up from €6000 to €7000 an existing bonus to help lower-income families to buy electric cars.

While announcing the scheme, the French President stressed, “I strongly defend a European preference in this area and strong support for the automotive industry. We must stand by this and it must happen as soon as possible,”

A copy of USA!

The French President has stressed that Europeans need to prioritize purchasing automobiles manufactured by European manufacturers and avoid foreign sellers like the Americans.

Taking a dig at the USA, the French President added: “I have been pushing for more European sovereignty for five years. The software (mindset) of many Europeans is changing. We must wake up; neither the Americans nor the Chinese will give us such gifts or priority! Europe must prepare a strong response and move very quickly.”

Well, the new French legislature is quite similar to what the US had introduced a few days ago. U.S. President Joe Biden had signed a legislation that eliminated electric vehicle tax credits for most models currently getting up to $7,500 credit, which was basically done to promote US-manufactured cars.

So here, France has undoubtedly given a harsh response to the USA for its Inflation Reduction Act and expressed that even the EU can challenge American automakers.

The United States and France have been at odds over a variety of issues for a very long time. In all honesty, even the US occasionally jeered with France.

A Stance on war, AUKUS, and weapons!

France and the United States surely began the war in Ukraine as allies, working together to support Ukraine and thwart Russia, but their positions today are radically different. The US is thoughtlessly arming Ukraine. However, France is now refraining from arming Ukraine. France has been very clear that it would not give Ukraine any assistance that is not necessary.

Macron has even scolded US President Joe Biden for warnings that the world is at risk of a nuclear “Armageddon”. In Macron’s words,“Europe does not want a World War”.

We do not want a World War.

The country had even argued that the Ukraine issue could only be settled through dialogue. In the UN also, Emmanuel Macron had backed a “peace accord.” Since Russia’s defeat is the only goal of the US-funded war in Ukraine, these steps of France were never approved by the US. Now when it comes to weapons delivery, last year, the US made France faint of heart as it persuaded Australia to dump its nuclear submarine deal with Paris and ink an entirely new deal with the United States and the United Kingdom under the umbrella of AUKUS.

The reply given by France was much more resounding. Paris persuaded UAE to purchase 80 upgraded Rafale fighters in a deal with the French Armed Forces Ministry worth €16 billion. This was one of the largest-ever French weapons contracts for export. In addition, France has also persuaded Australia to reconsider its AUKUS agreement with the US and UK by arguing that it will not be advantageous in the near future.

And now, France is directly opposing the US automobile sector by passing a law that is identical to the Inflation Reduction Act. If this is not a show of strength, what else will be? There is a cold Cold-war building between France and the US, and it has only begun to take shape recently. How will it go? It’s for us to wait and watch.