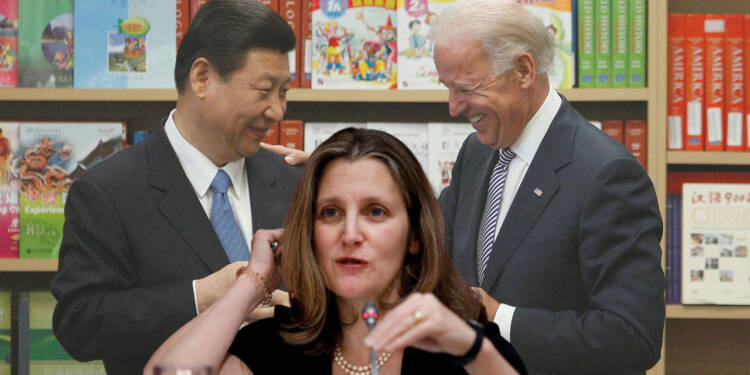 The North Atlantic Treaty Organization (NATO) extended Jens Stoltenberg’s term as its secretary general by one year in March 2022, making it last until September 30, 2023. However, a race to elect the new NATO chief is already underway.

According to American officials familiar with the discussion, the struggle among allies for who should succeed as the next chief of the military alliance has started in earnest. But, the US is pretty clear with its choice. In this close contest, Biden has cherry-picked a Neo-Nazi, a China Dove, and most crucially, a stupid in-charge from Trudeau’s Canada.

The race to elect the new NATO chief is already underway. If one remembers correctly, a few months ago, a Telegraph report revealed that Boris Johnson wants to take over as NATO’s new secretary general when the high-profile position falls vacant. The incumbent Jens Stoltenberg is expected to leave his position in September next year and as we said, Boris Johnson was expecting to replace him. However, it appears like US President Joe Biden has other plans in his mind, so Boris may have to wait.

According to unidentified US sources, Freeland is the leading contender for the position of NATO Chief. While she did not confirm or refute rumors of her eyeing the dream of succeeding as Secretary General of the North Atlantic Treaty Organisation, she just said that if she becomes the new NATO chief, she already has a “very huge job to do.”

Yet, if these claims are true, one should certainly have a lot of concerns. Traditionally, the NATO chief is chosen with unanimous support from the member countries, but we also know that becoming NATO chief is nearly impossible without US assistance.

We are all aware of how rapidly Chinese influence has grown in Canada under Chrystia Freeland and Justin Trudeau. It is quite clear to all of us that Chrystia Freeland is a Chinese stooge. If the US is backing Chrystia as the new NATO chief, it must draw concerns regarding the rising bonhomie between the US-led NATO and China.

Also, Chrystia Freeland has a vicious Nazi background, about which no one openly talks about. In a report published back in 2017, it was reported that Chrystia Freeland knew for more than two decades that her maternal Ukrainian grandfather was the chief editor of a Nazi newspaper in occupied Poland that vilified Jews during the Second World War.

When confronted by reporters about the stories that had been published in the media regarding her nazi history, Freeland had alleged that Russia was spreading misinformation. She has, however, also made an effort to portray herself as a victim and to show support for her grandfather.

In addition, for years, NATO had listed China as one of its rivals. It believed Beijing’s ambitions and its “coercive policies” challenge the Western bloc’s “interests, security, and values”. But, after the Ukraine war, things changed drastically. The current NATO Secretary General, Jens Stoltenberg, open-heartedly embraced China by saying, “China is not our adversary,”

And now, Biden is backing a contender who follows his similar soft-China policy. NATO and China are about to align together and it will unquestionably have major ramifications for NATO Alliance as it had promised to stop the Chinese expansion in the Indo-Pacific. If the rumors are true, NATO’s remote control will soon be in the hands of China!