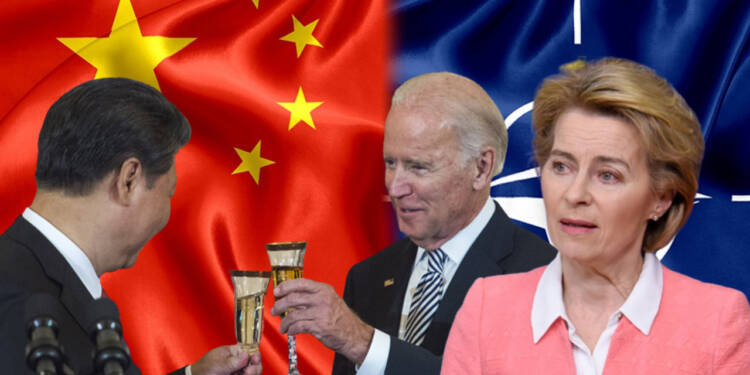 Geopolitical analysts around the world wanted the West and Russia to align together to contain China. Most seem to suggest the same even now, as China is challenging the rule-based world order. The indication has been seen in China’s nine-dash line through which it claims all the sea and land features falling under it.

At NATO’s leaders’ summit in Spain in June, the alliance’s new strategic concept (PDF), which outlines its goals for the following ten years, was agreed.

NATO for the first-time designated China as one of its strategic objectives. According to NATO, the Western bloc’s “interests, security, and values” are threatened by Beijing’s aspirations and its “coercive practices.”

He added, “China is not our adversary but we must be clear-eyed about the serious challenges it represents.”

West declared China as the next threat to world in the summit. Western leaders and analysts were worried that China may become more confrontational over Taiwan by taking inspiration from Russia’s actions in Ukraine. Taiwan is regarded by China as a part of its territory with no claim to independence, statehood, or international representation.

Also Read: A NATO-China alliance to take on Russia

NATO and China are allies now?

However, the recent happenings indicate a change in course. Chinese Foreign Minister Wang Yi has recently arrived in the United States on a surprise visit. Yi also met Jens Stoltenberg, the chief of NATO.

Stoltenberg has called on NATO Allies “to remain open to constructive engagement with the People’s Republic of China, including to build reciprocal transparency, with a view to safeguarding the Alliance’s security interests.”

Reportedly, the NATO chief discussed possible ways of ending Russia’s war against Ukraine. After meeting Wang, Stoltenberg announced: “I called on China to use its influence on Russia to end the war in Ukraine.”

A complete U-turn. NATO and China aligning together will have major ramifications for NATO as the biggest military alliance. The recent statement largely comes from US, which keeps Europe views on this still in shadow. Looking at the sudden change of heart of US, Europe isn’t going to be happy.

Also Read: Emmanuel Macron dug a huge pit, looked at it admiringly, then jumped into it

Several governments in Europe will be on backfoot because of this move. There are reasons for that.

Germany, the largest economy in Europe has been figuring to reduce its dependence on China. Greens Party which is in alliance with the ruling Social Democratic Party (SPD) is a China hawk party. Foreign minister and Green Party’s member, Annalena Baerbock, has one goal – to decouple Europe from China.

She has demanded that universal human rights be incorporated in any economic agreement between the EU and China and is hell-bent on making Chinese human rights violations a central part of Berlin’s foreign policy. Green Party’s other member and German’s Economy Minister Robert Habeck has been of the similar view.

China expert Tim Rühlig of the German Council on Foreign Relations (DGAP) said, “In the near future, if German companies want to invest, if they trade with China, they are likely to do so at their own risk and will no longer be able to rely on government guarantees and safeguards.” Germany’s Economy Ministry has refused to provide carmaker Volkswagen with guarantees in May to cover new investments in China because of concerns over human rights violations in the Xinjiang region.

If Germany adheres to NATO’s diktats on China, the government would readily fall as Green Party clearly doesn’t get along with China. Baerbock would likely launch a campaign against the move.

Same is the case with France. The supporters of Macron are anti-China and they support decoupling. Macron already doesn’t have parliamentary majority and also has seen a dip in popularity after elections. His government would fall in no time if it aligns with NATO’s move.

As the saying goes, “When Germany and France start sneezing, Europe catches pneumonia.” Therefore, we say, if NATO gets into a deal with China, most European governments will fall within a month.