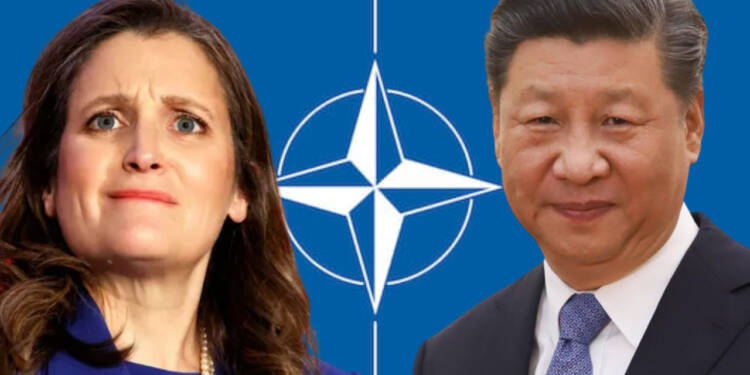 Who will take over as NATO’s secretary general when the high-profile position falls vacant in the future? Well, history tells us that a North-American politician has never held a top position in NATO. But, the tides seem to be turning now.

You see, the much-coveted position of NATO secretary general is contested by a number of potential candidates. And the list sees a new addition to it. The Deputy Prime Minister of Canada- Chrystia Freeland.

Not to mention, the lady holds two revered positions already. The Deputy Prime Minister and the Finance Minister of Canada is now interested in NATO’s top post.

“I have a really big job already. In fact, I have two big jobs—as finance minister and deputy prime minister of Canada—and I am really, really focused on those,” Chrystia Freeland responded when questioned by reporters on the NATO position.

Currently, she also holds a position with an organization that has an international focus after being appointed to the World Economic Forum’s board of trustees in 2019.

According to CBC, Chrystia Freeland has been “thrown around” as a prospective replacement for the current NATO secretary general, Jens Stoltenberg, for months in international defence and security circles.

Additionally, Freeland is one of several female contenders for the Trans-Atlantic organization’s next leader, and the organization appears to be leaning toward selecting a woman.

The rumours of Chrystia Freeland becoming a potential successor to the current NATO secretary general, Jens Stoltenberg, have started doing the rounds.

When Chrystia Freeland was directly asked if the rumours were true or not, she did not confirm or refute rumours of her eyeing the dream of succeeding as Secretary General of the North Atlantic Treaty Organisation.  Instead, she just said that she already has a “very huge job.”

Well, if there is any truth to these claims, we certainly have a lot of concerns.

You see, the NATO chief is chosen with unanimous support from the member countries, but becoming NATO chief is nearly impossible without US assistance.

But, what draws concern is the bonhomie of the US and China and now, NATO and China.

Because, obviously, Chrystia Freeland is a Chinese stooge.

We know that NATO recognizes China as a security threat. But, after Chrystia Freeland fills in the position, will NATO’s anti-China stance undergo a sea change?

While the Biden administration does all in its power to shield China, here it comes with a pro-China move.

You see, NATO lists China as one of its strategic priorities. It believed Beijing’s ambitions and its “coercive policies” challenge the Western bloc’s “interests, security and values”.

The current NATO Secretary General, Jens Stoltenberg, has been reported as saying, “China is substantially building up its military forces, including nuclear weapons, bullying its neighbours, threatening Taiwan … monitoring and controlling its own citizens through advanced technology, and spreading Russian lies and disinformation.”

“China is not our adversary,” he added, “but we must be clear-eyed about the serious challenges it represents.”

But will Chrystia Freeland be ready to take such a stance against China? We have already been reporting about how Canada is becoming more and more oblivious to Chinese assertiveness under the Liberal Party.

And more importantly, is the US now backing a contender who follows Biden’s soft-China policy?

All these concerns have got us worried.

Because one thing is sure, if the rumours are true, NATO’s remote control will soon be in the hands of China!