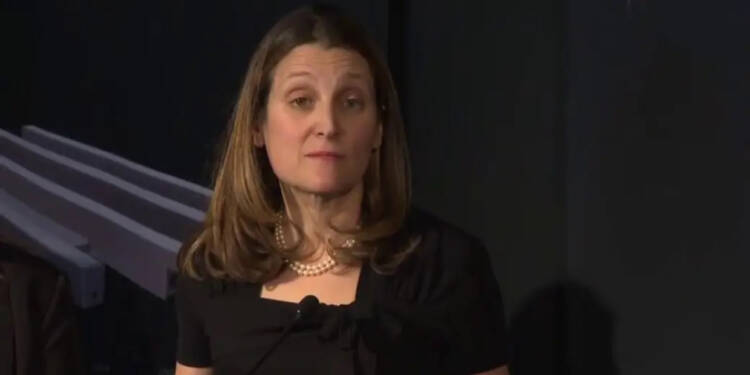 If you live in Canada, what is the need of watching a TV show and wasting money on subscriptions? Households in the country are already aching from the rising inflation. What’s the need to pay and buy subscriptions to watch cartoon characters when you’ve got a horde of them in the Canadian Parliament itself?

Canadian politicians never get tired of becoming the butt of jokes. Their statements become subject to mockery on social media platforms, but they still can’t help but give foolish advice to their countrymen.

It has been a long time since Canadian households have been struggling with spikey prices. The Prime Minister and even the Finance Minister of Canada have showcased their incompetence in dealing with the crisis until now. But, finally, the finance minister and the deputy prime minister, Chrystia Freeland, has come up with a solution.

Rising inflation has put several Canadians under stress, and the finance minister believes that cutting Disney+ subscriptions will do a lot of good. Perhaps, it will help the average Canadian pay for their hefty rent, pricey food, gas, groceries, etc. Chrystia’s tip was bound to backfire.

Twitter users reacted angrily and were confused when the federal finance minister announced she was cancelling her family’s Disney+ subscription and urged others to follow in her footsteps.

Chrystia Freeland spoke to Global News this past weekend on the rising cost of living, interest rates, and how Ottawa can help.

Freeland was questioned by anchor Mercedes Stephenson on the Liberal government’s willingness to examine programmes for unnecessary spending.

Freeland replied that the government has already stated it would look for $9 billion in federal budget reductions.

She did, however, add that she understood that Canadian families were having a difficult time and were scrutinizing their spending.

“I personally, as a mother and wife, look carefully at my credit card bill once a month. And last Sunday, I said to the kids, ‘you’re older now. You don’t watch Disney anymore. Let’s cut that Disney+ subscription,’” she explained. “So we cut it. It’s only $13.99 a month that we’re saving, but every little bit helps.”

Can the finance minister even trust her words while spitting out such rubbish advice? Surprisingly, the dictatorship in Canada is now asking the people to even stop watching TV. Freeland stated that she plans to follow parents’ cost-cutting practices by adopting them at the federal level.

“Because that’s the money of Canadians,” she stated.

She stated that a close examination of federal finances would be conducted, and the president of the Treasury Board would discover $6 billion in savings. A video of Freeland’s answers is doing the rounds on Twitter. One Twitter user wrote, “Chrystia Freeland has a tip for families struggling with inflation,” the tweet read. It has accumulated hundreds of negative comments and retweets since it was uploaded late Saturday afternoon.

Read More: The Trudeau Premium: How Justin Trudeau has been waging a silent price war with his own people

Clearly, Freeland has no answers or solutions to make “Expensiveland” less expensive to survive. Pierre Poilievre has been more than right in referring to inflation in Canada as “Justinflation.” Prices in Canada have gone out of control under Trudeau’s regime. Ever since he came to power, living in the country has become a hole in the pockets of Canadians.

People living in Canada will soon find themselves in a pool of debt before Justin Trudeau’s ouster from power. In Trudeau’s land, people are paying bafflingly higher prices than everyone else on earth. But, why can’t Freeland tip the Prime Minister to cut his spending on entertainment, socializing, dining, lavish hotel stays, and vacations? All they can do is ask the Canadians to stop living.

The Barbadian government is killing people, just to satiate the country’s liquor sellers