Netanyahu’s victory has made Zelensky really anxious and desperate 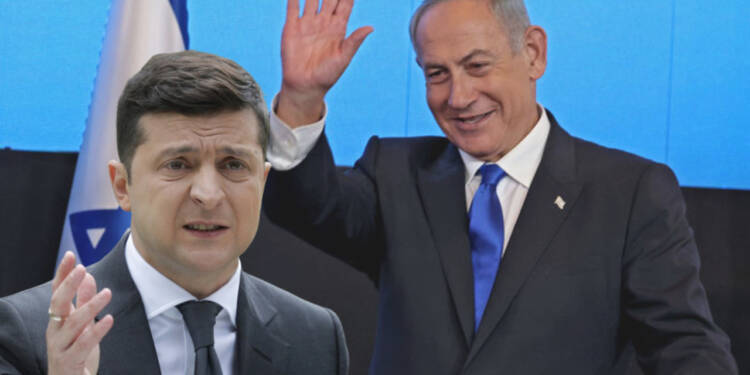 Israel election 2022: Zelensky is on pins and needles since Benjamin Netanyahu won the Israeli elections. Although there is no possibility of success, he’s attempting to persuade Israel to support Ukraine. Zelensky is ready to take anything that comes as help from anywhere. Well, as they say, a drowning man will clutch even at a straw. So, will Netanyahu give heed to Zelensky’s request?

As soon as news reports of Netanyahu winning Israel election 2022 started pouring in, the Ukrainian President Volodymyr Zelensky jumped onto Twitter and was among the first leaders to congratulate Netanyahu.

He tweeted, “Congratulations to @netanyahu on winning the Israel election 2022. It’s always important to see real democracy in action.”

Well, that’s how much you’d expect but that was not all. The tweet continued, “Ukraine and Israel share common values & challenges that now require effective cooperation. We hope to open a new page in cooperation with the new Israel Government for Ukraine & Israel benefit.”

It’s difficult to comprehend what common values Zelensky is referring to. The neo-Nazis, the Azov battalion and their crimes against Jews are well documented in the history.

And, what cooperation is Zelensky administration seeking? Well, that’s not a secret anymore; the pleading for weapons and more weapons.

Well, a tweet wasn’t enough. Zelensky even called Benjamin Netanyahu on Monday, to congratulate him and once again pleaded for “cooperation.”

Zelensky in conversation with Netanyahu said, “I think it is clear to everyone what Ukraine emphasizes and what security emphasis Israel makes.” Zelensky without naming Iran mentioned, “I believe that we can significantly strengthen our states, especially since the threats to us are related.”

This wasn’t the first time, Zelensky urged the Israeli government for military aid. Zelensky had earlier specifically mentioned Israel’s well-known “Iron Dome” anti-missile defence system, which is built to intercept and kill short-range rockets and artillery thrown into populated areas. Ukrainian officials have been pleading with the Israeli administration for the Iron Dome since the war started but in vain.

Israel has trodden a diplomatic fine line during the conflict in Ukraine, sending humanitarian aid for Kyiv while taking care not to enrage or antagonize Moscow at the same time.

Also Read: Biden’s foreign policy shows how scared he is of MBS and Netanyahu

Netanyahu has had a hostile relationship with the Democrats of the US. It’s wild of Zelensky to assume that Netanyahu would support US’ line of flooding Ukraine with weapons against Russia. Further, Netanyahu and Putin’s bonhomie is also well known. Israel won’t like to antagonize Russia, which has control over the airspace above its neighbour Syria and has let the Israeli Air Force conduct strikes on targets linked to Iran.

Just two weeks earlier, Netanyahu emphasized the same, “Our (i.e Russian and Israeli) air forces are flying side by side over the skies of Syria. [As prime minister], I wanted to assure the freedom of action of the Israeli Air Force to basically pummel Iran’s military positions that they tried to establish in Syria to open a second terror front against us. Thank God we’ve been successful in doing that.”

As Russia’s retaliation grows day by day, Zelensky’s pleading is understood as he has ants in his pants. But, Netanyahu has made a decision. He won’t be fooled by Zelensky’s ulterior motives and won’t fuel the war like the Americans and the West.