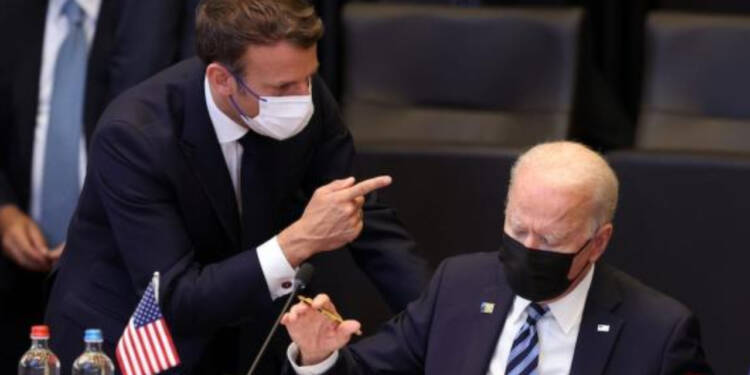 The rivalry between French President Emmanuel Macron and US President Joe Biden is not hidden from anybody anymore. On countless occasions, The United States has come to blows with France. Whether it is the war in Ukraine, the relations with Russia, or the tug of war for arms deals, Biden has never succeeded, thanks to Macron. And now, a similar incident has happened again at the COP27 summit.

Even before Biden’s arrival, Emmanuel Macron had already become the blue-eyed boy for the COP27 summit attendees. And why not, not everyone in the west has the guts to humiliate or challenge the United States like a pro.

According to a media report by Euractiv, French President Emmanuel Macron has lambasted the United States along with other rich non-European nations ahead of COP27 summit talks to pay their fair share to help poorer countries deal with climate change. While addressing the summit, the French President emphasized that the United States and the rich non-European nations have always failed to aid poorer nations in reducing the impact of climate change.

The French president stressed, “We need the United States and China to step up” on emissions cuts and financial aid, Europeans are paying, and We are the only ones paying.” Macron has also called for “innovative climate finance”, which should be created by the IMF, the World Bank, and the OECD. The project could be set up in the spring of 2023. Macron’s strong words against the United States were also widely appreciated by the leaders like Barbados’ Prime Minister Mia Mottley and Senegal’s President Macky Sall.

Well, history proves to us that the United States is ranked second on the top-polluters list. Yet, the officials of the nation have never failed to criticize and arm-twist smaller and weaker nations over climate change. Also, if you believe that’s it and Macron did nothing more spectacular than just rebuking against Climate change in the ongoing summit, you’re mistaken.

Emmanuel Macron has also met with Venezuelan President Nicolas Maduro. He made a major foreign policy reversal after encountering his Venezuelan counterpart Nicolas Maduro on the sidelines of the COP27 climate summit in Egypt.

Both leaders shook hands and engaged in conversation. Macron greeted Maduro and inquired about his country’s state of affairs.

“Excellent. Better every time,” Maduro replied, asking Macron when he would visit Venezuela.

To which, Macron said, “he will very soon travel to Venezuela”. Macron added, France “has to play a positive role.”

This is the same Macron who, in 2019, called Nicolas Maduro “a dictator” and an “illegitimate President.” We all know that Venezuela is a huge source of energy and thus, Macron is clearly acting for securing France’s energy needs. Due to their negative relations with Nicolas Maduro, Western countries had blocked Venezuelan oil for years. But because the times have changed, Macron has now formally begun to reverse the approach.

Biden also made an attempt to meet with Maduro a few months back but in vain. Just like former President Donald Trump, Joe Biden had continued recognizing Venezuela’s opposition leader Juan Guaidó as the legitimate president of the country and had publicly stressed that he won’t negotiate anytime soon with Nicolas Maduro.

But folks, in just 11 months, Biden was on his knees in front of Nicolas Maduro. Months ago, several senior Biden administration officials from the White House and State Department traveled to Venezuela to persuade Maduro for restarting ties. Maduro clearly denied Biden’s appeal and openly vowed to support Russia amidst the Ukraine war.

Read More: Biden is ready to legitimize Maduro – the illegal dictator of Venezuela

Joe Biden wanted to legitimize the Maduro regime so he can secure oil from the oil-rich Venezuelan fields. But his naivety made his plan fruitless. However, Macron overwhelmingly met and greeted Maduro and the results might be seen anytime soon.

Biden is nowhere to be seen at the COP27 summit gathering, while Macron has emerged as its breakout star. We believe it is time to admit that France is becoming stronger under Macron and that the US has fallen behind other western countries in the battle for power.