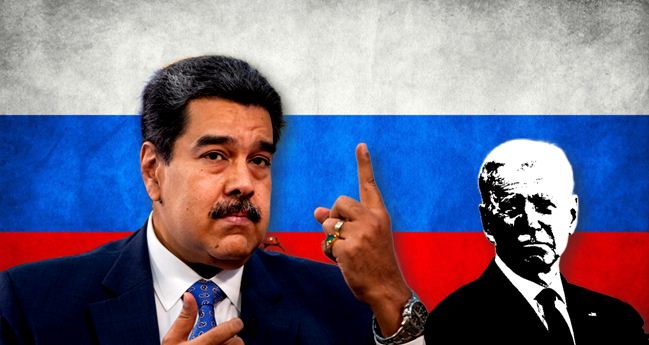 The American deep state considers the entirety of the Western Hemisphere to be the United States’ “exclusive sphere of influence”. No foreign powers are allowed to flex their muscles in the Western Hemisphere. This doctrine of Washington has antagonized many Latin American countries. But countries like Venezuela are not without fault too. Consider the case of Venezuelan dictator Nicolás Maduro. Would you call him anything other than an anti-democratic authoritarian who tramples upon the freedoms of Venezuelans? Chances are, you wouldn’t.

Venezuela is a Russian ally. Just like how the United States has been eating into Russia’s exclusive sphere of influence among Soviet satellite states, Moscow has made many friends in Latin America among which Venezuela tops the list of Putin loyalists in Washingtons’ backyard.

Venezuela’s President Nicolás Maduro on Tuesday assured Russian President Vladimir Putin of his “strong support” in a telephone call. The “strong support” was for Russia’s invasion of Ukraine. That tells you about the closeness between the two countries.

In the call initiated by Caracas, the Venezuelan leader also condemned “destabilizing actions of the United States and NATO” and spoke out against a Western campaign of “lies and disinformation.”

Several senior Biden administration officials from the White House and State Department traveled to Venezuela on the 5th of march and questions arises about the goal they intend to achieve.

It was simple. On the menu was recognition for Maduro’s regime, and a possible resumption of Venezuelan oil imports by the United States.

Nicolás Maduro of Venezuela was accused by the U.S. and the West of election fraud in 2019, with the White House recognizing opposition leader Juan Guaidó as the real president. However, in his blind hatred for Russia and Vladimir Putin, Joe Biden is about to do the unthinkable.

He genuinely believes that the U.S. can lure Venezuela into giving up on Russia. That attempt meanwhile seems to have failed. According to Reuters, the U.S. and Venezuelan officials held talks on March 5 but reached no agreement. The State Department, meanwhile, has refused to comment.

As expected, Joe Biden’s South American adventure seems to have failed. According to reports, the sudden enthusiasm of the Biden administration and U.S. State Department to engage in talks and high-level visits to Caracas has been fuelled by murmurs in Washington to consider Venezuelan oil as a possible substitute to Russian imports.

Read more: As we focus on Jinping’s China, what Maduro has done to Venezuela must not be forgiven either

Venezuela is just too invested in its relationship with Moscow. It will not break ties with Russia even if the United States agrees to purchase its oil. Yet, for Joe Biden to even consider legitimizing the regime of Nicolás Maduro by sending a high-level team to Caracas is a testament to the man’s commitment towards ‘democratic ideals and freedom.

In his hatred for Vladimir Putin, Biden is willing to go to any extent. If that means legitimizing dictators in America’s backyard, so be it.

NATO was all set to create a No-Fly Zone over Ukraine, but it chickened out