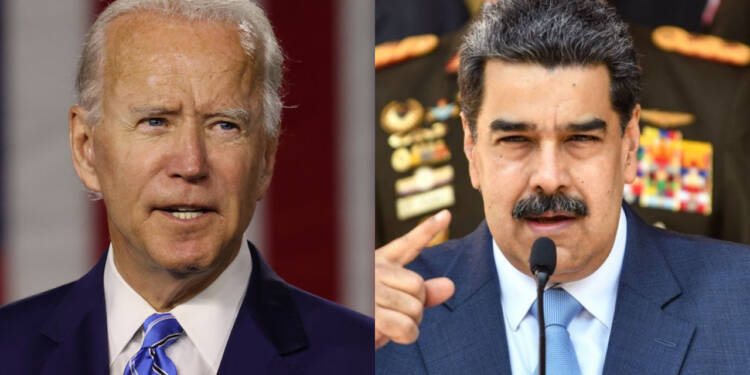 American liberal media’s Presiden-elect Joe Biden has come up with a major shocker. As per Bloomberg, Joe Biden’s advisers are preparing for potential negotiations with the Maduro regime in Venezuela. And you will be shocked to hear Biden’s plan. As per Bloomberg, anonymous people familiar with the matter said that a future Biden administration would look to push for free and fair elections, and offer sanction reliefs in return.

Presently, Washington recognises Juan Guaido as Venezuela’s real President. But it seems that things could change if Biden actually takes charge of affairs at the White House next year. With this, Biden could expose his Bernie hangover. Bernie Sanders, who idolises Venezuelan socialism, had hijacked Biden’s Presidential campaign. And the consequences are for everyone to see. Biden might go soft on Venezuela, so much so, that he trusts Maduro with holding free and fair polls.

Biden used to dismiss Trump’s foreign policy as weak. And Democrats used to claim that the Republican President refused to take on authoritarian leaders. However, it was Trump who set a tough precondition for Maduro. Trump administration maintains that it would only negotiate the terms of Maduro’s surrender. But as per Bloomberg, Biden’s advisers aren’t setting this tough precondition for Maduro.

So, it seems that it was actually Trump who was punishing an authoritarian Maduro regime. But Biden might actually reward Nicolas Maduro for no reason, and imprudently trust the Venezuelan President with free and fair elections.

Also, it is not just about Maduro or Venezuela. Any attempt by a Biden administration to extend an olive branch to Venezuela is bound to push the White House closer to the Communist world. Countries like Russia, China and Cuba back the Maduro regime. And while Biden continues to hate Russia rather dogmatically, China and Cuba will try to use any Venezuela-US negotiation for improving their own relations with Washington.

But Biden’s apparent bonhomie towards Venezuela is not a mere diplomatic manoeuvre. Rather, it is a consequence of Bernie’s increasing influence on the Democratic Presidential nominee. Biden’s Presidential campaign was organised on lines of Bernie Sander’s ideological ambitions. In fact, most of Biden’s promises were actually a manifestation of Bernie’s socialist dream.

Now, Bernie himself has been a long-time fan of Venezuelan socialism. In 2011, Sanders even endorsed an editorial reading, “These days, the American dream is more apt to be realized in South America, in places such as Ecuador, Venezuela and Argentina, where incomes are actually more equal today than they are in the land of Horatio Alger. Who’s the banana republic now?” under the ‘must read’ section on his official website.

Later, Sanders did attempt to claim that his “democratic socialism” is different from Venezuelan President’s Nicholas Maduro’s brand of socialism. But the 79-year old leader still doesn’t recognise Juan Guaido as Venezuela’s President, even though Washington considers him as the real leader of the Latin American nation.

So, long story cut short- Bernie adores Venezuelan socialism. He prefers Maduro to Guaido. Bernie took over Biden’s campaign and turned it into a radical-socialist dream. Now, Biden is being projected as the elected US President and the 78-year old Democrat’s advisers might be looking to negotiate with Maduro.