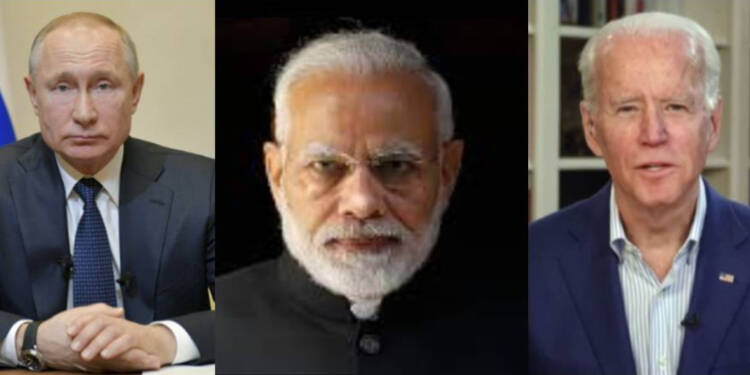 The United States aims to play an important role in the Indo-Pacific region and India will be one of its most influential and key strategic partners. While the threat of China rises, the United States must choose wisely to take any action against India or its transcendental ally Russia.

While the Trump administration had been willing to keep Russia out of focus, it remains to be seen whether the Biden administration will follow suit if and when he comes to power.

Democrats have historically been obsessed with the Russian threat, but with the changing realities of the international order, it’s high time that they realized the immediate threat that impedes the United States.

India’s relation with Russia has stood the test of time. Soviet support in 1971, despite the presence of USS Enterprise in the Bay of Bengal, helped India to win the war. Therefore, any US action against this special relationship will not bear fruits for the US ambitions in the region.

Putin also understands the crucial role India plays and will play further forward as tensions in the region intensify. The relations between the two states have been hitting new highs ever since Russia decided to halt China’s delivery of the S400 missile system and instead chose to expedite the process of selling and delivering it to India.

Moreover, the Brahmos and its subsequent joint production and delivery to other states have brought India and Russia closer to each other. Russia has leased two nuclear submarines to India and has also provided the technology to nuclear reactors for Indian submarines. No two countries have such deep trust and cooperation.

The Russia-India defence co-operation is huge as Russia accounts for 80% of India’s total arms imports.

India-US relations have also come a long way. The bipartisan consensus that the relationship enjoys is proof of the trust and understanding the two powers have for each other, and India expects the Biden administration to follow suit and strengthen the relations between the two states while at the same time get on board with the special relations India and Russia share.

Read More: US and India have signed a historic military pact and it is going to be a gamechanger

And in 2020 during the third India-US 2+2 meeting in New Delhi, former Defence Secretary Mark Esper stressed inter-operability so that ‘we can build capacity to fight together if we are called to.’ Secretary of State Mike Pompeo, at the same meeting, said: “The US will support India to defend its territorial sovereignty and liberty.” “We can have a joint deterrence — jointly deter Chinese tyranny.”

Moreover, India became the US’ major defence partner in 2016, US arms trade has increased from $200 million in 2008 to $20 billion in 2020. Besides, India and the US also signed the BECA military pact. All these actions have highlighted India’s importance to the US strategy in the Indo-Pacific.

Therefore, the United States, if and when a new administration comes to power, will need to behave in a considerate way. Moreover, to stem the Chinese growth India’s co-operation is important and India is aware of the status it now holds in the regional and global order. Therefore, the US needs to find a balance between its actions on Russia, in regards to its ambitions and relations with India.

Thus, even for Russia, it’ll be important to improve relations with India as much as possible because only India has the sway and power in the region to save it from the democrat peril.