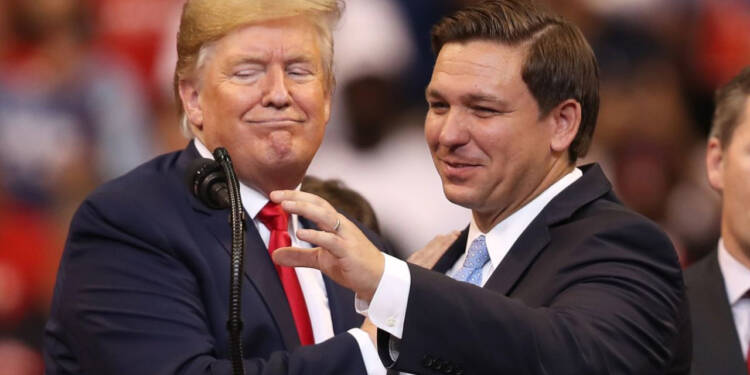 As the results of the US midterm elections began to come on Tuesday, US media branded Trump as the election’s “greatest loser.”. Biggest loser because Ron DeSantis, another Republican candidate, triumphed in Florida by a wide margin. Liberal media is engaged in pitting Ron DeSantis against Trump and showcasing him as the new Republic leader.

Well, the effort of liberal media is appreciable but it’ll only blow up in its face. Because a feud between Ron DeSantis and Trump doesn’t exist.

Ron DeSantis, Florida’s governor was re-elected in the midterms with a huge margin. The midterm elections results were extensively covered by western media. However, as usual, the liberal media gave it, its own colour.

The Atlantic on US midterms headlined its report, “Trump Lost the Midterms. DeSantis Won”. The subheading continued, “If the Florida governor ever intends to wrest control of the GOP from Trump, now is his moment.” Guardian headlined its report, “Ron DeSantis landslide victory brings Trump and 2024 into focus.” Another report headlined, “Trump branded midterms’ ‘biggest loser’ as DeSantis win fuels 2024 talk.”

Read More: Macron ridicules Biden like a Pro at the COP 27 summit

NPR headlined, “DeSantis’ sweeping victory in Florida sets up a potential rivalry with Trump.” The Economist also said, “The rise of Ron DeSanctimonious.”

NBC News continued the narrative and claimed, “Chuck Todd: Bad night for Trump; Good night for DeSantis.” And many more.

One can clearly assume the propaganda being spun by the liberal media. It is creating an imaginary feud between the two republican leaders. Ron DeSantis has not even announced whether he will serve out the remainder of his second term or will fight for the presidency. But to liberal media, DeSantis is already a messiah who will go against Trump.

Trump’s popularity and ramifications of propaganda

Even after two years of leaving office, former President Donald Trump continues to rule the world of US political news. Democrats are holding hearings and conducting raids to portray Trump as evil in an effort to dissuade him from running for president again.  The majority of Americans (55%) now believe that Trump was either not at fault for the riots that overran the Capitol or was only partially to blame.

Republicans generally support Trump, with a favorable approval rating of 80% or above. He has a low 50s “extremely favourable” rating. By this measure, Trump is more beloved by Republicans than Biden is by Democrats. There is no Republican active in the political arena who is as well-liked at this point by the party as Trump.

And at this time, when Ron DeSantis is being pitted against Trump by the media, the move is ludicrous. When democrats are losing ground, the media has resorted to creating a “feud” between the leaders. This can further perturb republican voters as they can take matters into their hands and vote extensively to prove how popular Trump is. But then, that’s how narrow-minded media has become, it doesn’t realise the ramifications of what it is sowing. They must realise that the activities undertaken by the media outlets currently will ultimately work against their agenda.