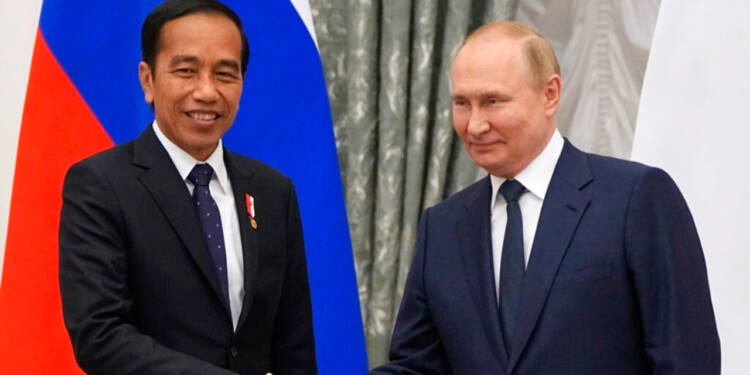 In the midst of the conflict between Russia and Ukraine, demonising Russia remains the only objective still on the table for the Western powers. The western powers earlier ensured that Russia would no longer be a member of the G8. And now, the Western nations are undoubtedly planning to ostracize Russia for its invasion of Ukraine during the G20 summit that will soon take place in Indonesia.

However, Indonesian President Joko Widodo is ensuring that the anti-Russian agenda of the West does not become the highlight of the upcoming G20 summit.

Nevertheless, the Biden administration of the United States, Canada, the United Kingdom, and others have previously used strong-arm tactics to pressure Indonesia to omit Russia and President Vladimir Putin from the list of invitees for the G20 summit, which is set to take place in Bali in November of this year. Indonesia, however, opposed all of these attempts to exclude Russia from the upcoming G20 summit. In a related move, Indonesia is apparently attempting to stop the next G20 summit from devolving into a Russia-bashing fest by asking the top Western politicians to rein in their criticism of Moscow so that all participants can be brought on board.

Widodo also wants to stop the group from making the same mistakes as the G8, which expelled Moscow and changed its name to the G7 in 2014 after the Crimea decided to join Russia.

But why is Indonesia hesitating to follow the lead of the Western powers? Russian armaments are a must for Indonesia, which also owns Su-27 and Su-30 fighter jets. Jakarta actually wanted to buy the Su-35 combat fighters from Moscow, but Washington interfered. While acknowledging the need for Moscow’s friendship in order to stand up to China in the Indo-Pacific, Indonesia is also trying to woo Russian investors.

As you can see, Indonesia has little faith in the US. Jakarta needs a steady supply of armaments from Russia because it is aware that China poses a serious danger to the Indo-Pacific’s peace and stability.

Read more: A setback awaits Joe Biden at the G20 summit in Indonesia

Moreover, the Indonesian public tilts in favor of Russia a lot. In fact, Vladimir Putin is quite a sensation among the people of Indonesia, where admiration for strongman leaders holds a big place within the masses.

Nevertheless, any country which hosts such summits like that of G20 summit holds a significant power to set the agenda of the meeting. And as Indonesia gears up to host the summit, it will place it in a position of power. It doesn’t look like Indonesia will not submit in front of the West and risk its relationship with Russia in order to satisfy some arbitrary morality standards that the developed world has been constructing over the recent months. Instead, Indonesia will pursue a free and autonomous foreign policy that is in its interest.

Evidently, Indonesia is aware of the significance that Russia currently holds on the international stage and that criticising Russia on such stages would be counterproductive for the world. Because of its reckless decision to forbid the import of Russian oil and gas, the entire continent of Europe is already experiencing an economic catastrophe. In addition, the Western powers are to blame for the Russian food embargo, which is causing a serious food crisis in underdeveloped and poorer countries. In this situation, Indonesia intends to prevent further enragement of Russia and believes that bringing it on board will resolve the matter once and for all.