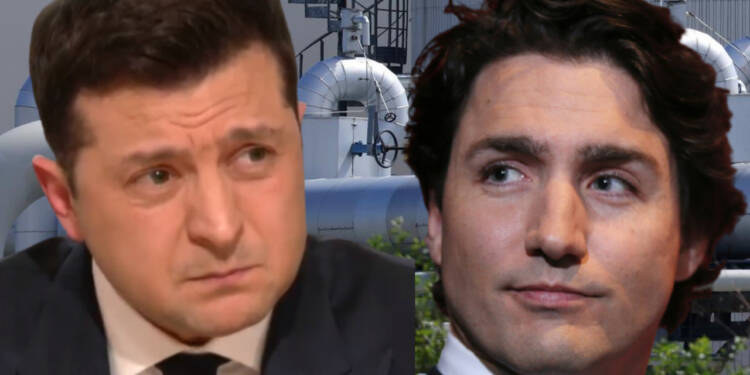 True leaders are obligated to protect their citizens from adverse conditions. Especially the journalists in a war zone.

But, Canadian President Justin Trudeau is far from a true leader. After Canadian Journalist Guy Boulianne was added to Ukraine’s hitlist, Trudeau has refused to utter a word.

The absence of concern towards the journalist’s (Guy Boulianne) life is visible across the Canadian media.

Canadian journalist, Guy Boulianne was added to the death list on Monday by an Organisation named ‘Mirotvorets’ meaning ‘Peacemaker’ in Ukraine. Alas, in the regime of Volodymyr Zelensky peace is established by killing people.

Zelensky regime reportedly runs an organization known as Mirotvorets, which is a state-run unit under Ukraine’s Security Service that produces a list of people and organizations deemed to be “Enemies of Ukraine.”

Mirotvorets is essentially a list that is made public and targets anti-Ukraine and anti-Zelensky voices. The names of those on the list are declared to be those of the regime’s enemies, and an unofficial death warrant is issued for them.

A government-backed organization like Mirotvorets that produces a list of people whom they proclaim “Anti-Ukrainians” should not be a part of a healthy democracy, as it motivates illegal groups to promote violence without the need for legal action.

Over 4,000 people including several have been on the blacklist. Journalists like the Italian Andrea Rocchelli, the Ukrainian Oles Buzyna, the former Ukrainian lawmaker Oleg Kalashnikov, and the war reporter Daria Dugina were all put on the list and eventually killed.

But, you’d wonder, why a journalist Guy Boulianne from Quebec 7,000 kilometres away from Ukraine was added to the death list?

Boulianne believes that his article on Faina Savenkova, a 14-year-old Lugansk girl is a reason he made the list.

The 14-year-old girl was put on the list after she highlighted the terror inflicted by the Ukrainian military in eastern Ukraine. She’s not the only child whom Ukraine considers a terrorist, there are more than 300 children who have been added as enemies of Ukraine. She is punishable by death under Ukrainian law as an “info-terrorist” because she is deemed to be a threat to national security. Bouliane wrote about her criticism of the sad state of affairs in Ukraine.

Since the news of Guy Bouliane has added to the hitlist, Canadian media has kept mum on the issue. No show of support has been seen in mainstream Canadian media. Nothing from the Canadian Association of Journalists or Black Press Media for Guy Boulianne. These are the same journalists who always urge their government for protection. Will they demand protection for Bouliane?

Nothing has been said by the government either. The same Trudeau in 2020 said that a crackdown on journalism puts democracy in danger. It would be the direct responsibility of the Canadian government to protect Guy Bouliane.

Well, for us to expect the Trudeau government to do something for Guy Boulianne is absurd. Trudeau’s government has always suppressed the independent outlets and journalists who ever report against their administration. The situation was even worse in Covid-19 when journalists have pushed around and threatened with death simply for doing their job.

Therefore, the silence on Guy Boulianne’s name occurring on the death list of Ukraine’s Justin Trudeau is understandable. Why would Trudeau speak against his friend Zelensky, who has made his name for evil and inhumane crimes? Trudeau himself is complicit in his own country what Zelensky is doing in Ukraine. He is no messiah for “free voice.”