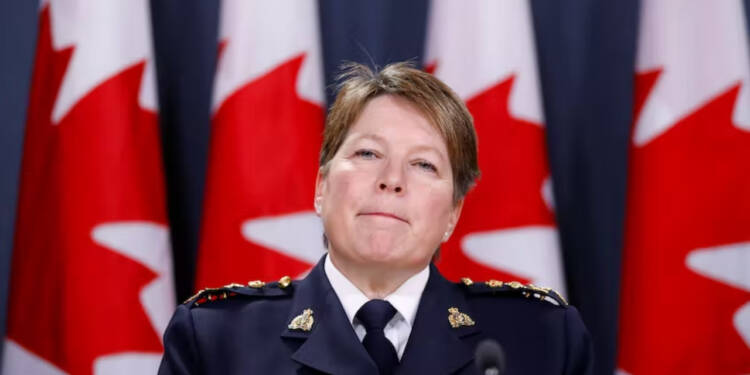 Do you know how many controversies the RCMP has been involved in? Google it, and you’ll get a whole series of them. The RCMP has a history of failures.

In the organization, there are many corrupt, racist, even molesters, and paedophile cops. This is all because of the failed leadership of Commissioner Brenda Lucki, whom the Canadians consider a colossal moron.

She has made the RCMP a disgrace to Canada. People in Canada despise her. Her term is set to expire. But, it doesn’t appear that she will leave the top post.

The reason behind this is pretty obvious, RCMP’s Brenda Lucki is not up to the job, but what she is good at is protecting Justin Trudeau.

According to the new media reports, RCMP Commissioner Brenda Lucki has announced that she will remain at the helm of the federal police force.

RCMP Commissioner, Brenda Lucki has stressed, “I’m absolutely staying on as Commissioner of the RCMP,” she told reporters after testifying at the inquiry into the invocation of the Emergencies Act.

For the unaware, Brenda Lucki, the RCMP commissioner, recently testified over the Emergency Act, which was imposed back in early 2022. Commissioner Lucki has dealt with a series of controversies that have put the government on the defensive. Her five-year term comes up for renewal in March.

No conflict between Trudeau and Brenda

In the midst of this, the Canadian elite media is showing that Brenda Lucki is at odds with the liberal government in Ottawa. But, that’s just a bluff.

The truth is that Brenda Lucki, the commissioner, is Trudeau’s puppet and has never failed to save the Ottawa administration from danger.

The RCMP has never operated as a police force under Brenda Lucki; instead, they have always operated as Trudeau’s employees.

For instance, The Commissioner faced criticism for how she handled the tragic shooting incident in Nova Scotia. Subordinates of the RCMP in the province accused her of pressuring them to reveal the types of weapons used after the massacre in order to promote the Liberal government’s gun agenda.

At that time, she had pledged to “challenge assumptions” and ensure that “no stone will be left unturned” in dealing with issues of discrimination, sexual harassment, and misconduct within the force.

One of the main reasons why Canadians in all 13 provinces despise the RCMP is because of her rude behaviour toward Justice.

Under her charge, things have only grown worse. Numerous women and girls have reportedly been physically and sexually attacked by RCMP officers, according to Human Rights Watch. To back up these accusations, which include police threats, torture, and sexual assault, a report was even issued a few years ago.

Brenda has frequently rejected the idea that systemic racism occurs in her force and often stresses that the RCMP doesn’t know what racism is.

Brenda will never leave RCMP until Trudeau is in office, and the reason behind this is pretty clear, she remains useful to the Liberals as a diversionary figure: someone who deflects negative attention away from Trudeau, and on herself for allowing the force to be influenced.

Her testimony illustrates the degree of confusion and disarray within the RCMP during the trucker convoy, which would support the government’s argument that it was necessary to use the Emergencies Act. Indeed, the worse Commissioner Lucki comes off, the better the Liberals will look.

So, if one thinks about why Brenda will still stay in office, the answer is only because of her loyalty to Master Trudeau.

A Caribbean-Africa partnership is happening finally, and it’s a terrific development