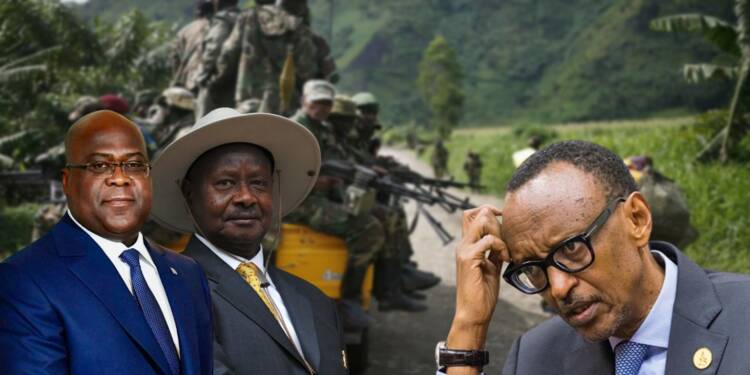 The Congolese Revolutionary Army, usually referred to as the March 23 Movement or M23, is a rebel military force that is centred in the eastern parts of the Congo. They were routed and pursued into Rwanda and Uganda in 2012–2013 by Congolese and UN forces. The return of M23 in the current era has wreaked devastation in Congo. In order to increase its influence in the territory of its mineral-rich neighbour, Rwanda has supported the M23 for a long time. But now that three African countries have teamed together to demolish the insurgents permanently, the Rwandan government’s blood is running cold.

According to recent reports, Uganda is sending 1000 soldiers to the DRC to assist the government in fighting rebel groups.

This decision was made following the sending of troops from Kenya to the DRC to assist in the fight against the rebel organisation M23 in Goma, the DRC’s North Kivu province’s capital.

The Ugandan army, which is already in conflict with the Allied Democratic Forces (ADF), a rebel group with bases in the country, has noted that it will send about 1,000 troops to the DRC’s eastern Ituri region before the end of the month.

According to the Ugandan army spokesman Brig Gen Felix Kulaigye, the group intended for this mission has been in training for months. Plans to train and deploy this unit has been in the works since June of this year.

The M23 was formed in 2012, claiming to defend the interests of Congolese Tutsis, a group sharing the ethnicity of Rwanda’s President Paul Kagame, against Hutu armed groups, seizing Goma, the largest city in DR Congo’s east, the same year. After a peace deal in 2013, many M23 fighters were integrated into the national military.

The group resumed fighting in late 2021 after lying dormant for years, accusing the government of having failed to honour an agreement over the integration of its fighters.

It has since captured swathes of territory in North Kivu, including the key town of Bunagana on the Ugandan border in June.

For months now, M23 has waged its most sustained offensive in years, killing dozens and forcing at least 40,000 people to flee in only a week’s time. Nearly 200,000 people had already been displaced over the past year even before the latest surge in violence.

Rwanda may claim to have no ties to the M23 movement, but the data clearly shows otherwise. You see, a sizable portion of the world’s supplies of cobalt, copper, diamond, tantalum, tin, and gold are found in Congo. It is the Democratic Republic of the Congo’s principal source of export income.

Also Read: Kenya chases US out of Rwanda and renders M23 terrorists orphan

Given that M23 can assist Rwanda in gaining access to these reserves, it is completely feasible that Rwanda is funding the organisation for this purpose in order to profit quickly from the minerals.

In addition, Rwanda was exposed while smuggling the minerals across borders.

However, the Rwandan government has begun to behave like a cat on hot bricks as key African states like Kenya and Uganda join forces with the DRC to crush M23. Recently, Kenya’s former President Uhuru Kenyatta pursued Rwandan leader Paul Kagame on the need for M23 rebels to cease fire and withdraw from captured territories in the eastern Democratic Republic of the Congo (DRC), according to the East African Community (EAC) bloc.

This is a fundamental shift from Rwanda’s existing foreign policy goals, make no mistake about it. It denotes, albeit ambiguously, that the Rwandan government has accepted of assisting the M-23 movement. Rwanda is afraid and is left alone as other powerful African states come to the DRC’s aid. The Rwandan government’s support for M-23 may soon end since isolation from its neighbors might be fatal for the country’s government both at home and abroad. As such, the M23 might soon be consigned to history’s ash heap without any financial or military assistance from Rwanda.