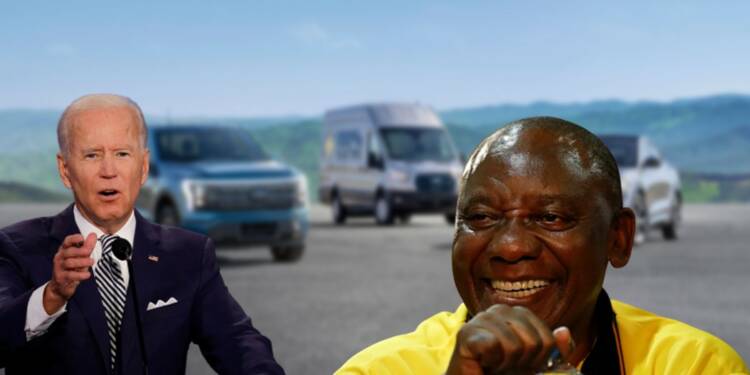 Ford Motor Co: South Africa wanted to use a part of the $8.5 billion which the US, Germany and France were going to provide it as climate funding, on its electric vehicle industry. However, the West objected to this decision of the South African government because they wanted it to use the funds on the replacement of coal-fired power plants with renewable energy.

The US and its allies decided to not release the funds. Their decision was motivated by the irrational longing of the US to create its monopoly in the electric vehicle industry. Despite the huge market size of the US which is estimated to grow from $28.24 billion in last year to $137.43 billion in 2028, its attempt to prevent a developing nation like South Africa, which has been through a series of political and economic turmoil, is brazen and represents the West’s neo-colonial mindset.

Biden understands that if South Africa develops its electric vehicle industry then that will dismantle the dominance his nation has on the sector. The US has maintained this hegemony through increasing its import duty and tariffs. South Africa’s plan is perceived as a hindrance to its monopoly, therefore it didn’t release the funds.

Read more: Why South Africa should say NO to USA’s $8.5 billion charity?

The US also sees the power of oil-producing countries as a threat to its authority. The largest oil-producing states across the globe are major players in geopolitics which influence the decisions and policies of other countries due to the importance of oil as an essential commodity.

According to data published by the US Department of Energy in 2015, just fifteen nations account for 75% of oil production in the world and have 93% of reserves. In fact, as per the BP Statistical Review of World Energy 2020, about ninety five million barrels of oil was produced in 2019 which was an increase of 17% when compared to a decade ago.

Saudi Arabia comes on the list of the top oil-producing nations, has a production of 11.8 bpd which is 12.4% of world’s total. It is also the leader of the OPEC group. Similarly, Russia accounts for 12% of oil supply which is 11.5 million bpd. Taking this into consideration, the US wants to curb the influence and power of oil producing countries by diminishing the value of oil. But how is it going to do that?

By developing its electric vehicle industry and cutting down the usage of oil-based cars which is the largest market of oil consumption. Then people will start buying electric automobiles more and their reliance on oil and gas will gradually decrease which will reduce the power which OPEC have in political and economic domains of world politics. But again the power will shift if the production of oil shifts to the production of EV to other countries. This is the reason due to which America wants to keep the EV hegemony to itself.

Ford’s involvement in the issue

Now, an executive of Ford Motor Co emphasized that South Africa needs a policy to transition its automobile industry to electric vehicle manufacturing within six months.

Currently, South Africa’s automobiles, which accounts for five per cent in GDP, are exported mostly to European countries but Britain is considering putting an end to new petrol and diesel vehicles from 2030, followed by the EU in 2035.

In such a situation, Ford, a major corporation, can step up and start investing in auto industry of South Africa and push it to pursue electric vehicle manufacturing. The African country has the manpower and resources as last year Cyril Ramaphosa announced, while speaking at the launch of Toyota Corolla Cross Hybrid, that South Africa will export it to forty countries which will bring nearly $1 billion to its economy. In fact, according to a Canalys, which is a research company, South Africa must pursue EV production as its sales are expected to grow by 160 per cent.

Thousands of people in the nation are employed in this sector which holds immense capability to produce cars, therefore if Ford sets up a plant and start the production. If everything goes according to the plan, then South Africa will become the first country in Africa which will take the lead in the production and export of EVs. South Africa has already irked Biden and his allies with its decisions on foreign policy front and with this development it will deliver another blow to the West.