The USA wanted to set a precedent that if any African country will think of going against it, the country will face the wrath of America as Ethiopia is facing but it failed miserably 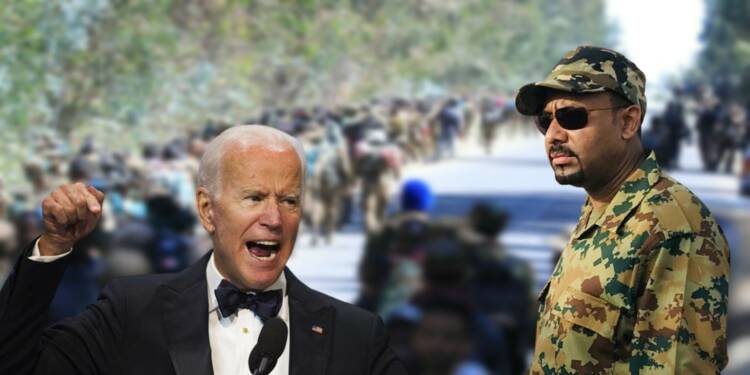 The leaders of Western nations are perplexed by the absence of strong backing from many African states, during the Russo-Ukraine war. Numerous African countries have emphasized their right to preserve their own national interests rather than merely deferring to the dictates of more powerful, wealthy states. Ethiopia is leading the charge in this contemporary struggle for self-determination being waged by the African nations.

Ethiopia is assured of its independent, non-aligned foreign policy, which stays out of disputes between superpowers. The United States has come under fire from PM Abiy on numerous occasions for its hegemonic and paternalistic treatment of African nations as well as for attempting to impose its political agenda on the entire world. This is why, in order to express its anger, the US Persists to harass Ethiopia by supporting the TPLF.

The TPLF has received political, military, and psychological assistance from the West, particularly the US, throughout the conflict. The backing includes denoting TPLF as Tigrayan Defense Forces (TDF) in order to disrespect Ethiopia’s sovereignty. The sanction-saber-rattling of United States is also a well-known phenomenon.

The U.S. is interfering in the nation’s internal affairs under the guise of humanitarian concerns. All of its motives for betraying its regional friend are self-serving and zero-sum. The growing geopolitical independence of PM Abiy is unsettling to the United States.

For America, if the TPLF is able to achieve extensive autonomy for its home region through force after attempting to do so peacefully but failing, this could then spark drastic reforms that advance its federalist agenda over the rest of the nation. The U.S. would then take advantage of the potential for these regions to have extensive autonomy to put individual pressure on them to kowtow to America’s demands.

But not everything is happening according to America’s plans. The Tigray People’s Liberation Front (TPLF), continually appears to be on the verge of defeat after a two-year battle. Ethiopian and Eritrean forces are in charge of the majority of the important cities in Ethiopia’s Tigray Region. Furthermore, even a peace agreement was signed between the Government of Ethiopia (GOE) and the TPLF earlier this month.

Seeing the fall of TPLF, the US attempted to continue meddling in Ethiopia’s internal affairs by employing its puppet organization – the UN. You see, the UN Resolution on Ukrainian reparations was approved by the General Assembly a few months ago. Make no mistake, this equates to the development of “lawfare” tools that will be militarized by Washington for Hybrid Warfare purposes against the Global South in the New Cold War.

The “international register” for tallying damages from Russia’s special operation and the corresponding “international mechanism” for obtaining reparation from it will be established as a result of this controversial resolution. This resolution thereby sets the precedent for the rapacious America to create the same against Ethiopia too in order to also punish it through similar “lawfare” means.

Ethiopia was therefore completely right to vote against the UN resolution on Ukrainian reparations in order to prevent further US interference in its internal affairs by the development of mechanisms akin to those that would be developed against Russia under that pretense.

To be clear, as retaliation for the Ethiopia’s independent foreign policy and ensuing decision to maintain neutrality in the New Cold War between the declining unipolarity of America on one hand and the ascendant multipolar great powers of China and Russia on the other, the US intended to engage Adis Ababa in combat. The defeat of Ethiopia was meant to be a strong warning to prevent all other countries in the Global South, especially those in Africa, from making the same mistakes. The US wanted to set a precedent that if any African country will think of going against it, the country will face the wrath of US as Ethiopia is facing.

Instead, Ethiopia’s success had the opposite effect in that it made all other Global South nations, particularly those in Africa, realize that it is possible to triumph despite overwhelming odds provided that society as a whole remains united and supports their military forces.

Far from giving up, Ethiopia is intensifying its efforts and is now more determined than ever to spearhead the battle against American colonialism. PM Abiy has demonstrated that African leaders can oppose the U.S., which may serve as an example for other African leaders who may later face similar pressure from America.

Particularly among the burgeoning powers and the rest of the Global South. Ethiopia is making allies and expanding its influence. Others have seen that there is an alternative to capitulation thanks to its principled resistance to the American hybrid assault against it. It is feasible to respond in a way that promotes national harmony.

American destabilization schemes are not always proficient.  The Ethiopian government has shown that if one fights with the right intent can bring even the mighty American empire to its knees.