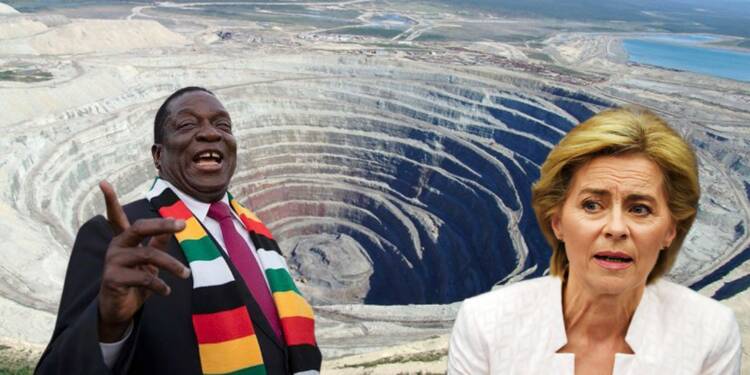 Zimbabwe has been through a tumultuous political and economic situation for a long time thanks to the West. The US and Europe perceived its refusal to entertain their demands as a threat, hence they decided to teach it a lesson. But over the years, people are realizing that this is unjust and one of them is George Roach, CEO of Premier African Minerals.

Sanctions were put on Zimbabwe by the US and European Union. Their decision was in response to the controversial land-reform programme of the country which involved seizing the land of privileged white farmers and redistributing it among landless black farmers. The government justified its move by claiming that it was done to correct a historical injustice.

The real motive behind the Western sanctions was that the African country under former President Robert Mugabe didn’t acknowledge the dominance of the US and Europe and had good relations with Russia.

Currently, Zimbabwe is not being ruled by an authoritarian leader. Since 2017, the country has witnessed democracy under President Emmerson Mnangagwa with free and fair elections and freedom of speech yet the West didn’t consider lifting its sanctions.

The ambiguity in West’s actions show that Uncle Sam may punish a small country when perturbed but there is no time limitation or a mechanism which pulls back those measures when those measures have completed their work.

Now, Premier African Minerals Ltd is a mining and natural resource development company. It acquires and develops mineral resources in West and Southern Africa. It deals in a variety of commodities such as lithium, tantalum, tungsten potash, limestone etc. Premier African is involved in a lithium and tantalum drilling project in Zimbabwe and has reported positive results from it.

Now that West is losing its grip over mineral rich countries like DRC and CAR it is now turning towards other sources to acquire minerals like lithium. The West is well aware that it cannot purchase lithium directly from Zimbabwe because it will be a violation of their own sanctions. Therefore the West has strategically deployed its companies to scramble for the mineral reserves it needs. In their bid to secure lithium some European companies have approached the CEO of Premier African Minerals, George Roach and have requested an agreement from his company’s lithium project in Zimbabwe.

George Roach stated in an interview, to The Africa Report, that the European Union and the US should remove their sanctions on Zimbabwe and invest in the lithium sector of the country. According to Roach, these corporations should speak up for the removal of sanctions on Zimbabwe. The country has one of the largest lithium reserves in Africa, in fact one of its mines which is located in the Masvingo province has a reserve of 10.8 million tons of lithium.

Roach acknowledges that the country has the potential, resources and manpower to grow but it is not able to. Therefore, he is using his position to voice support for the upliftment of sanctions on Zimbabwe which have pushed it into a crisis. In fact, many leaders have demanded the West to do the same.

The impact of sanctions on Zimbabwe’s economy has resulted in skyrocketing inflation, debt distress, poverty, unemployment etc. The nation has lost about $100 billion in aid and grants from financial institutions such as the African Development Bank. The World Bank uncovered that the GDP fell from $6.78 billion in 2001 to $4.42 billion in 2008.

But as George stated that the West should come themselves to the South African nation and start refining lithium while removing decades old and irrelevant sanctions. The West should understand that it will not be successful in its backdoor diplomacy while slapping sanctions on the front. It should start respecting African nations as equals and not masters or it will keep losing influence across the continent.