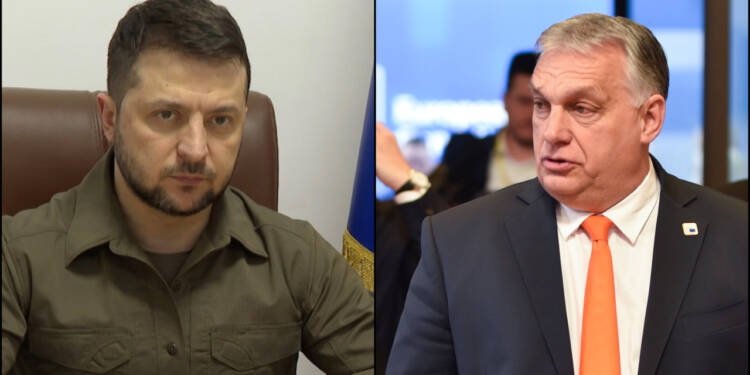 Be it aiding the war-torn nation Ukraine, or criticising the invading country Russia, Hungary has always kept itself independent of the bloc’s machinations. The world has witnessed that for the European Union, it is almost like a call of duty to extend solidarity for Ukraine, even if it means harassing its citizens. Hungary, on the other hand, is a Samaritan nation, but only for its own citizens.

Ever since Russia waged a war against Ukraine, the EU has been funnelling funds in the name of humanitarian aid to the country regardless of the crisis the continent is itself facing. The bloc has always been in a bid to assist Ukraine with its financial requirements as well as its restoration efforts but Hungary remained at odds with the bloc’s interests. And, this is what continuously irks the war-torn Ukraine.

A few days back, the EU made a new plan to assist Ukraine with billions in budget assistance, but one member state publicly rejected EU’s new initiative to assist Ukraine. This puts a new obstacle in the way of Ukraine’s wish to continue existing at the behest of the EU. Hungary’s Prime Minister Viktor Orban said on Friday that his nation will not back the EU’s plan to give Ukraine billions in budget assistance next year. According to the aid plan, Ukraine will get 18 billion euros ($18.6 billion) annually starting in 2019 to help maintain the country’s energy and healthcare infrastructure as well as pay for employees’ salaries and pension plans.

Despite Hungary’s condemnation of Russia’s actions and sympathy for the Ukrainian people, Orban stated during a conference in Budapest that he was unwilling to put those interests ahead of those of his own nation.

Read More: Hungary and Serbia now have a Russia Policy independent of the EU’s machinations

If various media reports are to be believed, Hungary has announced that Budapest won’t back European Union efforts to aid Ukraine with jointly raised funds. Foreign Minister of Hungary, Peter Szijjarto has announced as the EU continues to stay at loggerheads with Hungary. According to Szijjarto, Hungary has done enough in supporting Ukraine on a bilateral basis and will continue to do so. But, Budapest opposes any arrangements involving co-financing with other EU member states.

Hungarian Prime Minister Viktor Orban has made it clear that he has no money for Ukraine and this was enough to irk the nerves of Zelensky. So, he attempted to show off his strength by holding Hungary to ransom. Recently, Ukraine announced that it is in a bid to hike the transit fees for Russian oil through the Druzhba pipeline to the EU. According to a letter from the firm Ukrtransnafta seen by Bloomberg, the corporation in charge of operating Ukraine’s oil pipeline network, will likely hike fees for shipping petroleum to Hungary and Slovakia by €2.10 per tonne to €13.60 ($13.90) beginning on January 1.

Druzhba, one of the longest pipeline networks in the world, carries crude some 4,000km from Russia to refineries in the Czech Republic, Germany, Hungary, Poland and Slovakia. The Ukrainian company has attributed the price hike to the “continued destruction of Ukrainian energy infrastructure” which has resulted in “a significant shortage of electricity, an increase in its costs, a shortage of fuel, spare parts.”

Zelensky thought of hurting Hungary’s oil imports and he might have his own reasons to validate the hike but we certainly know what is the ulterior motive behind it. The comedian turned President of Ukraine tried to give a bone-chilling warning to Hungary, but only in vain. But, the main question is did Ukraine succeed in achieving that?

Hilariously, no. Zelensky’s attempt to frighten Hungary with price hikes turned out to be a failed adventure.

Read More: Hungary and Italy will not spend even a single penny on Ukraine’s “rebuilding”

The Hungarian Prime Minister was recently seen wearing a scarf that depicted historical Hungary, including parts of Ukraine and neighbouring countries, at a football match. Now, the Ukrainian officials are demanding an official apology from the Hungarian side and a refutation of the encroachments on the territorial integrity of Ukraine.

However, Orban’s knee-jerk reaction must have insinuated that his stance against funneling any further aid to Ukraine is unwavering. And, this is how Zelensky’s attempt to hold Hungary to ransom meets a tragic end.