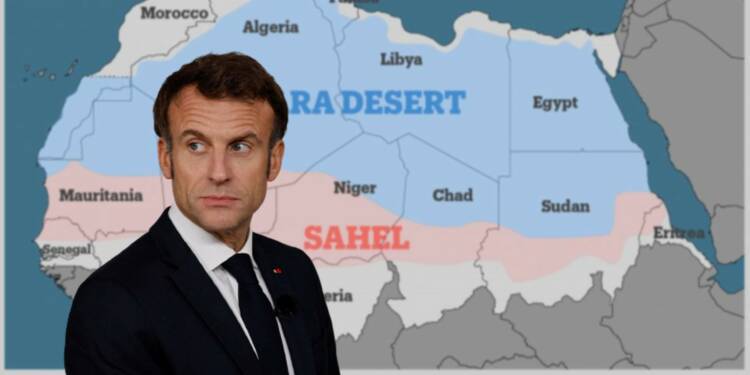 The supremacy of the west in the Sahel region is nearing its end. France has withdrawn from the region, and along with it, other European nations are also on the cusp of being thrashed by the discerned African countries in the region.

However, for the West, Africa is a gold mine that could keep them prosper till eternity. The battle for uranium and oil is still going on in the region, and Macron doesn’t want to miss an opportunity to make a strong comeback to the Sahel after his Mali debacle.

For this, the blue-eyed western boy wants to stir up fresh problems in the West African region, just besides the Sahel. Very soon, Operation Barkhane 2.0 is about to begin.

According to Africanews, West African nations have met with European leaders at the Sahel Security Summit for talks on “homegrown” ways to prevent jihadist conflict in the Sahel threatening to “engulf” countries near the Gulf of Guinea. Reportedly, Coastal nations like Ghana, Benin, Togo, and Ivory Coast face increasing threats and attacks from Islamist militants across their northern borders with Burkina Faso and Niger.

He furthermore added, “Terrorist groups, emboldened by their apparent success in the Sahel region are looking (for) new operational grounds, a development that has triggered a southward drift of the menace,…” (sic)

The Sahel Security Summit was conducted as a part of Accra initiative. Heads of state from the Gulf of Guinea, Niger, and Burkina Faso had met with representatives from the West African bloc ECOWAS, the EU, Britain, and France.

Almost every nation in West Africa is facing the heat of the Sahel spillover. States in the Gulf of Guinea are presently experiencing terrorist attacks as a result of the Sahel crisis, which started in northern Mali in 2012 and spilled into Burkina Faso and Niger in 2015.

Since 2012, the French and other foreign peacekeeping forces had been working in Mali to curb the crisis.

However, following two coups in Mali, the military junta expanded its ground and permitted the entry of what Western nations refer to as “Russian mercenaries”.

As a result, France withdrew its forces stationed as part of its Barkhane anti-jihadist mission. Germany and the United Kingdom made similar announcements last week that they will no longer take part in peacekeeping missions. However, the unpredictability in the area continues, and as of now, attacks have started to erupt in West Africa. So, what this summit could mean? Well, what one could understand is that the West, especially France is beefing up preparations for Operation Barkhane 2.0.

France was humiliated by the way Mali Government ended military ties with France recently. France lost the Malian public’s confidence owing to a lack of accountability over civilian losses during military operations. Additionally, the French forces’ inefficiency exacerbated the situation worse from Mali to its neighbours and now to the West African countries. The influence of France on the region has drastically declined and is virtually nil. However, France sees the Sahel as a source of a ‘gold pot’ and does not want to lose control of the area. If one recalls, French President Emmanuel Macron declared earlier this month that as part of a restructuring of its operations, France would produce a new “roadmap” for the African continent, which would be “finalized within six months.”

Read More:  The story of Sahel: How the US and EU came to a disturbed region and turned it into a never-ending strife

West African nations might have a bee in their bonnet that the West would help them in ‘homegrown’ operations against insurgents. But that definitely wouldn’t be the case.
The West, and particularly France, are parasites that wish to stay in the Sahel till eternity. Further, Paris would have an ideal base to continue its salvage efforts in Africa through nearby territories like West Africa. This is not help but France’s Operation Barkhane 2.0.