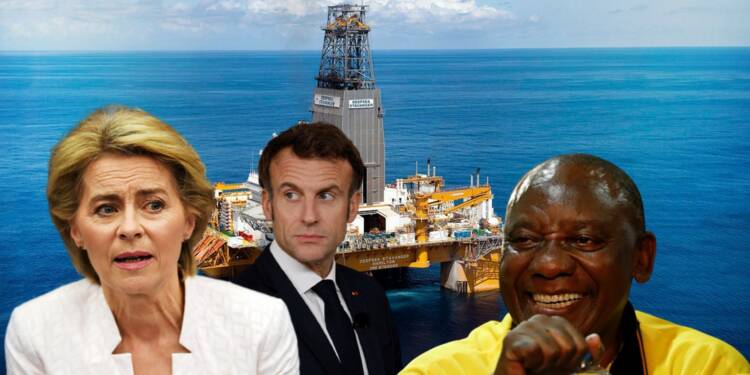 The West has been digging its grave ever since the initiation of Vladimir Putin’s fight to protect his nation from the wrongdoings of Zelensky and the West. The conspiracy of Biden and his allies to destroy Russia met a tragic end. Due to which they are now knocking on the doors of South Africa to beg for oil which they used to control before.

TotalEnergies, which is a French multinational energy corporation, is going to file an application for permission to drill five wells for oil or gas between Cape Town and Cape Agulhas of South Africa.

Many foreign companies have filed applications for approval to start oil and gas projects along the coast of South Africa, a report released by an environmental research group called Urgewald stated.

Now, TotalEnergies is the same energy company which is involved in the construction and partial-financing of a strategic and ambitious oil pipeline project between Uganda and Tanzania, known as the East African Crude Oil Pipeline Project (EACOP), the pipeline will stretch around 1,443km from Lake Albert in western Uganda to the Tanzanian port of Tanga on the Indian Ocean.

The project promises energy boost and financial progress in Uganda and Tanzania. However, it was severely criticised by the European Union. In fact, the EU went a step ahead and decided to pass a resolution against it. The move, which was intended to shame the African countries for being inconsiderate towards the environment, was condemned by Ugandan President Yoweri Museveni.

If there is one thing the US and Europe are most infamous for, it is deploying strategies to hinder the progress of Africa. However, the neo-colonial agenda of the West, was properly dealt with as Museveni firmly stated that the EACOP will not shut down and will go forward.

The West tried to sanction Russia on the pretext of Ukraine-Russia crisis. However, their measures failed because instead of damaging Russia’s economy, the sanctions led to the highest inflation in the US since last forty years. Similarly, the European Union’s autumn forecast uncovered that EU nations would be in recession in the last quarter of 2022.

And now, West is struggling for resources and have chosen African as the target of their desperate greed.

The West came scrambling for LNG to Mozambique. Its president has agreed to supply liquefied natural gas (LNG) to Europe. The government of Mozambique entered into a contract with a British company called BP for this purpose. The plant producing gas is being operated by an Italian energy company called Eni.

The US and Europe are in a helpless position, their leaders are using every method to get their hands on African energy sources. But they cannot purchase oil from Uganda and Tanzania as the EU has passed a resolution against their oil pipeline project when there was not any shortage of oil. But after the crisis they cannot buy oil from the EACOP pipeline due to their stance on the project. West’s hypocrisy have been exposed many times in Africa, therefore they are avoiding this route.

Similarly, the West’s organised loot of oil in Nigeria through multinational companies has been exposed by the Nigeria’s navy. The government, which lost 600,000 barrels of oil or more per day, recently announced that it is launching a sophisticated operation to put an end to the unrestrained theft of its mineral resource. This resulted in a major setback to the US and EU.

Now that Biden, Macron and their allies have exhausted all options, they have decided to approach South Africa for their energy needs. They know that they cannot beg Uganda, Tanzania and Nigeria to fulfil their requirements, therefore they are urging South Africa for help.

However, Cyril Ramaphosa has time and again taken anti-West decisions. This resulted in Biden creating instability in South Africa by issuing a terror alert recently. Hence taking this into account Ramaphosa will certainly not acknowledge the US and Europe’s need for oil. Because he is well aware that these nations will not think twice before backstabbing him.