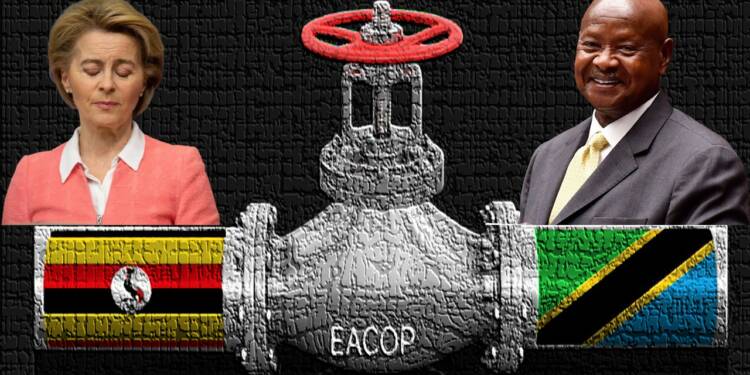 Uganda’s President Yoweri Museveni criticised the EU parliament after it asked his government to stop a strategic and ambitious East African Crude Oil Pipeline project (EACOP) with Tanzania. Recently, the European Union also passed a resolution condemning the project, calling it a threat to the environment. Museveni, speaking at the annual Uganda International oil & gas summit said, “Some of these EU MPs are insufferable and so wrong that they think they know everything but should calm down”.

He praised the East African Crude Oil Pipeline project that will stretch 1,443km from Lake Albert in western Uganda to the Tanzanian port of Tanga on the Indian Ocean. Museveni further said, “This is the wrong battleground for them. I hope our partners join us firmly and advise them. For us, we’re moving forward with our programme.”

The president of Uganda criticised the European Union (EU) leaders for being so out of touch with reality. Yoweri Museveni unmasked the agenda of the West for their sudden concern for human rights and environment in Africa. The West is known to interfere in the matters of other countries; its habit of hindering the growth of states in Africa and Asia continues to exist. Every time a nation is doing something constructive, the West shows up uninvited with its views and expert comments on the matter. Uganda’s leader realises the significance of pan African development and growth which the US and the EU dislike. No wonder they try every method to stop any attempt of unity between African leaders.

The EU being threatened by the progress of Uganda and Tanzania is a glimpse of its deep rooted fear of losing control over Africa and its resources forever. In a bid to calm this fear EU is shoving green diktats down the throat of Africa in the name of environmental concern. In pursuance of the same, it decided to pass a resolution hoping to stop the progress of the said oil pipeline project which will primarily benefit the two nations along with their neighbours, make them self-sufficient, reduce their reliance on Western imports and develop their economies. Additionally it is these two countries whose carbon emmissions are extremely low, yet they are being stopped to tread on the path to development in the name of environmental concerns. Uganda’s deputy speaker called out this act as neo-colonialism being practiced by the US and the EU. When dealing with Africa they believe that they are the most civilised, informed and educated, and that it is they who will dictate the terms.

EU has surely forgotten that, one should first set its own house in order before asking others to do so. The carbon emissions of EU have been off the charts for decades. Yet it deems it right to done the hat of an environmental preacher.

West’s sanctions on Russia: A mistake

The US and the EU are victims of their own decisions; their recklessness has put them in a helpless position. Even before Russia’s military action in Ukraine began, NATO, the EU and the US started plotting the downfall of Russia. A huge number of sanctions and bans were imposed on Russia. However, West’s plans backfired. The European Union was entirely dependent on oil, gas and other essential commodities from Russia. Now that supply is cut, EU nations are experiencing skyrocketing inflation, shortage of oil/gas and lack of essential commodities. The people in countries such as France and Germany are angry with their governments for caring more about Ukraine and Zelensky than their own citizens.

US and EU feel threatened by Africa’s rise

In such a situation, the US and the EU see Uganda and Tanzania’s East African Crude Oil pipeline project as a gateway to self-sufficiency, development and unity with Russia’s support. An Africa which can think for itself, make its own decisions, is energy sufficient, does not need imports and has Russia’s backing is one of the biggest nightmares of the West. The West is afraid of the pipeline project because it can bring the demise of its dominance in African countries. For a long time, the US and the EU have used their political leverage to exploit the mineral resources in Africa.

While countries like China have entangled African nations into debt-trap in order to gain control over their mineral resources, the US put sanctions on those which it sees aligning with Russia in the name of democracy and human rights. The West’s purpose of putting sanctions on African states is used as a political weapon to blackmail them.  EU now has to swallow the bitter pill of a harsh reality, wherein France being its major member is also investing in this crude oil project.

Fortunately, African leaders like Museveni have begun to see the real intentions of the West which are to dominate Africa, hinder any attempt which makes it self-reliant, obstruct any progress and steal its mineral resources. His underlying message is in tune with the lines-‘our land, our country and our resources. If one of your members wants to partner with us then why do you have a problem?’

With nations such as Uganda and Tanzania pushing back against EU’s interference, the message is very clear that this is not a colonial era. That Africa is not going to tolerate this classic tactic used by the West anytime it sees the so-called Third World moving away from its control.