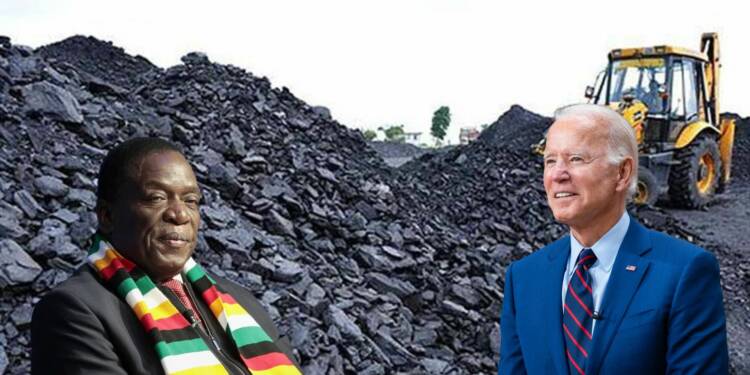 Zimbabwe sanctions: Europe is energy-hungry. Do not be fooled by the bunch of encouraging news coming out of Europe as energy prices have decreased since the summer, and recent dry weather has led to the filling of European gas reserves.

Due to the scarcity of coal, on which a significant portion of European nations are compelled to resort, the energy crisis is still present and poses a serious threat to Europeans. The situation has deteriorated in some countries, like Poland, that people are stealing coal.

In the midst of this, a European country has reached a coal agreement with Zimbabwe. But the White House continues to remain a major hurdle.

According to a media report by Reuters, Zimbabwe Contango has plans to export thermal coal to UK in 2023. Reportedly, the London-listed branch of Contango, following requests from customers in Europe and Asia, has planned to start importing thermal coal from its Zimbabwe mine in the first few months of 2023.

For those who don’t know, Contango owns 70% of the western Zimbabwe’s Lubu project, in Hwange district which is rich in coal.

The company’s primary goal is to supply its low-sulfur coking coal to the industrial and ferroalloy markets in southern Africa, but it has found the current prices of thermal coal, which is used to generate electricity, to be attractive.

Zimbabwe’s neighbor South Africa saw an eight-fold increase in coal exports to Europe during the first half of 2022 after the European Union banned coal imports from Russia as part of sanctions for its invasion of Ukraine.

Similarly, Zimbabwe is also keen to earn an extra buck. In a public statement, the UK-based Contango has stressed, “Fuelled by the dramatic rise in thermal coal prices over the past 12 months … the board is now considering a coking and thermal operation, delivering 10,000 tonnes of coking coal and 10,000 tonnes of thermal coal per month based on current capacity in H1 2023,” (sic)

If this happens, Zimbabwe would surely become a reliable partner of UK and other European nations. However, this collaboration between UK and Zimbabwe could hit a snag due to America’s interference and sanction game.

Thanks to the USA, Zimbabwe has endured a turbulent political and economic situation for a very long time. The real reason the West imposed sanctions on the African nation led by former President Robert Mugabe was that it refused to recognize the dominance of the US and Europe and had positive ties with West’s counterparts, China and Russia.

Years have passed, and Mugabe is gone. Yet, the USA hasn’t thought about lifting its sanctions, only because of their god-damn superiority complex.

Till today, US officials reiterate that sanctions are not targeted at most Zimbabweans but at individuals who are responsible for human rights abuses, anti-democratic actions, and corruption. But at last, we all know the reality.

Since the 1990s, skyrocketing inflation, debt distress, poverty, unemployment, etc. has grappled the flourishing economy of Zimbabwe. The nation has lost about $100 billion in aid and grants from financial institutions such as the African Development Bank due to West’s sanctions. The World Bank uncovered that the GDP of Zimbabwe fell from $6.78 billion in 2001 to $4.42 billion in 2008.

The sanctions have stifled the development of the nation as it is barred from getting much-needed loans from the International Monetary Fund and also misses out on probable trade deals.

If Europe wants to reduce its energy thirst with the help of Zimbabwe, the very first thing it may have to do is remove trade sanctions against it and violate the ones imposed by the USA. Now, does the Europe have guts to do this? That only time would answer.