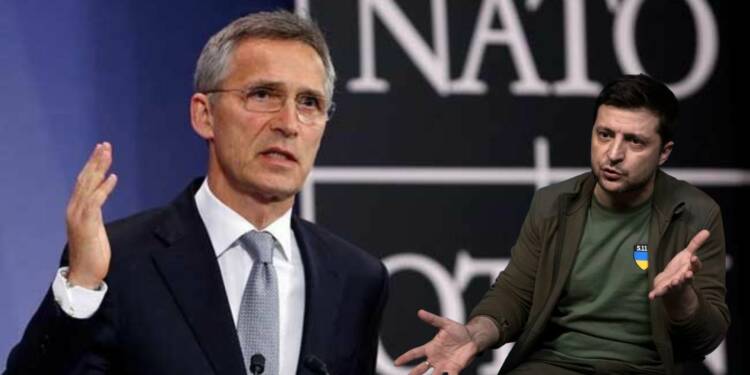 NATO Secretary General Jens Stoltenberg has quietly rejected Ukraine President Volodymyr Zelensky’s NATO bid. Ukraine has a long-awaited desire to join NATO. The reason which infuriated Russia to take military action against it. Alas! Zelensky’s dreams are up in the air.

According to NATO Secretary General Jens Stoltenberg, Ukraine should place more of its attention on defending its territorial integrity and resisting Russian aggression than on joining the alliance.

Rejecting the possibility of Ukraine joining the Western military alliance, the NATO chief said, “The most immediate and urgent task is to ensure that Ukraine prevails as a sovereign, independent democratic nation in Europe. And to do so, we need to mobilize as much as we can, when it comes to military, economic, financial, humanitarian support to Ukraine.” (sic)

He stated this at a meeting of the Foreign Ministers which took place on November 29–30 in the capital of Romania. He stated that Kyiv shouldn’t hurry into joining the alliance in the briefing that followed.

He also took a jibe at Ukraine by stating that, “If Ukraine does not prevail as an independent sovereign state, then of course the membership issue is not at the table at all.”

After Russia annexed four of the occupied Ukrainian territory in the eastern Donbass area, Ukraine submitted an application for membership in NATO. Zelenskyy has long vowed to join the NATO alliance, which perturbed Russian President Vladimir Putin.

Later, Zelensky stated in a taped message which was played outside his presidential office that his formal application for NATO membership was a “decisive step” done to safeguard “the entire community” of Ukraine. He highlighted security concerns and said that Russia’s invading forces had ruthlessly taken towns and cities in Ukraine. He promised the Ukrainians that Kyiv’s application would be taken into consideration “expeditiously.”

In an earlier interview with French television station BFM, EU Commissioner Thierry Breton echoed the remarks of the NATO chief by saying that Ukraine’s NATO bid and official membership into the Western military alliance might not be successful as long as it is involved in the armed conflict and hostilities with Russia.

Breton stated that Ukrainian President Volodymyr Zelensky’s application to NATO was not being considered as it was engaged in a war against Russia and that was a “disqualifying factor.” According to Breton, a nation must not be at war in order to qualify for NATO membership. He also emphasised that, countries join NATO “when the countries are at peace.” This is due to the fact that the whole Alliance would be involved in the fight, he stated further.

What a mockery of Ukraine by Western countries and NATO. They all first gave a bait of joining NATO to Ukraine. Then Ukraine expressed its desire to join the US-led military alliance, they even made commitments in order to lure it further. They even deplored Putin for not letting Ukraine join the military bloc. And the West finally backstabbed Ukraine by rejecting its bid.

The extensive bid of Zelensky irked Putin who launched a “military action” in Ukraine in February. Analysts assumed that NATO would shield Ukraine but that has not happened. The statement by NATO chief is significant as the support which Ukraine relied on before going in the confrontation against Russia isn’t coming.

It’s time Zelensky and its regime realise that it’s nothing more than a proxy battleground for US against Russia.