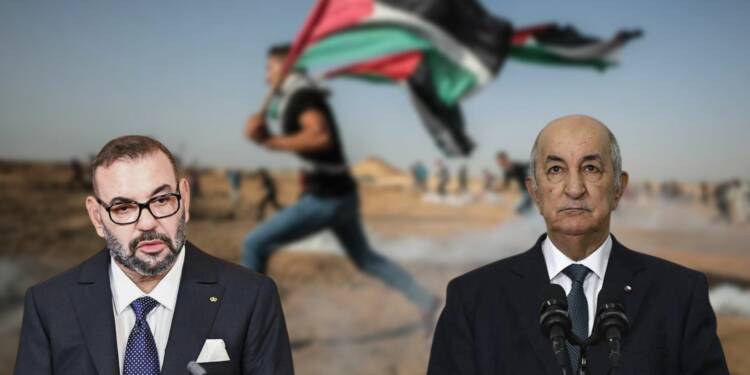 Western Sahara has been used as a bargaining tool between Algeria and Morocco for many years. Algiers has always been viewed by Rabat as a supporter of a separatist movement. Algiers, for its part, sees the issue as one of decolonization while continuing to offer the Polisario Front political and military backing. Up until recently, both capitals were able to contain their disputes, but current historical and geopolitical circumstances are escalating the rivalry.

The attitudes of the Algerian political class have been formed by caution and worry about Morocco since the time of former President Houari Boumédienne. Authorities in Algeria are wary of their western neighbour due to patriotic feelings that developed after the two nations’ 1963 Sand War. The military hierarchy and Algerian President Abdelmadjid Tebboune have often emphasised the need of remembering the battle. Any chance of a diplomatic resolution with Algiers has been made more difficult by Rabat’s recent warming relationship with Israel. So, a series of minor moves toward a crisis led to the current state of affairs between Algeria and Morocco.

Larger geostrategic contrasts have also contributed to the current predicament, in addition to the historical reasons at play. Algeria stopped supplying natural gas to Morocco via the Maghreb-Europe Pipeline on 1st November. After several tumultuous weeks, Algiers abruptly banned all Moroccan military and civilian aircraft from its airspace, among other drastic steps. Although, Rabat claims that such decisions have no bearing on Morocco, they are actually a sign of a wider struggle for dominance in the area. Both Algiers and Rabat have opposing and potentially conflicting ambitions for North Africa, so none is ready to tone down its stand. Algiers only sees the region via the history and anti-colonial struggles of the latter, but Rabat uses realpolitik to promote a liberal, unconventional agenda.

In recent months, tensions between Algiers and Rabat have reached the limits of intensive-diplomacy. After several political incidents, the situation is now at the point of military escalation. A full-scale war is still avoidable, however, if Algerian and Moroccan authorities can be convinced to settle their disagreements peacefully. That will require the active engagement of international organizations to address the underlying drivers of conflict, including the issue of Western Sahara.

Also Read: To tackle the Algeria-Russia combine the West is literally bribing Morocco

A convergence of interests?

The COLD- War between the two African countries seem to lose steam once it reaches Palestine. You see, Algeria is considered one of the Palestinian government’s most financially supportive Arab countries. Recently, on the International Day of Solidarity with the Palestinian People, Algerian President, Abdul Majid Tebboune, renewed his call for defending Palestinian rights.

Tebboune cited the ‘Algerian Declaration’ which was announced last month to end the internal Palestinian division.

“Marking this day,” Tebboune said, “reiterates the inalienable rights of the Palestinian people to create their independent state, with Jerusalem as its capital.” (sic)

He also said that “marking this day reminds the international community of its historic, political, legal, moral and humanitarian responsibility for the Palestinians and their rights.” (sic)

Tebboune stressed that the Palestinians want the international solidarity to be translated into “practical steps and executive measures”, noting that this needs the support and efforts of the international community, the UN Security Council and the UN General Assembly.

Similarly, Morocoo too has reaffirmed its support for Palestine. Recently, King Mohammed VI reaffirmed Morocco’s steady position in support of the legitimate rights of the Palestinian people to an independent state with east Jerusalem as its capital.

“I avail myself of this opportunity to reiterate my country’s clear and firm position regarding the justness of the Palestinian cause and the legitimate rights of the Palestinian people, in particular their right to establish their independent Palestinian State, with East Jerusalem as its capital – a state living in peace and security alongside the State of Israel (sic),” the King said in a message to Sheikh Niang, Chairman of the Committee on the Exercise of the Inalienable Rights of the Palestinian People.

He stressed the two-State solution as “a realistic option” to the longest lasting dispute in the world. This caught the eyes of geopolitical analysts across the globe as this comes against the backdrop of the growing ties between Morocco and Israel.

Just two years after the Abraham Accords were signed, memorandums of understanding are developing into business agreements, and trade between Israel and Morocco is increasing at previously unheard-of rates.

Therefore, Israel would undoubtedly have some concerns about Morocco’s unwavering support for Palestine. Only time will tell how long Morocco will be able to stick to toeing the Algerian policy in Palestine.