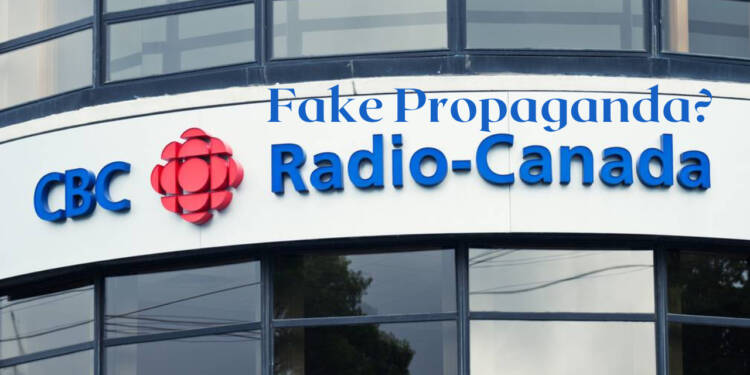 Is CBC news left leaning: Media outlets, such as newspapers, magazines, radio, or television, exert significant control over the political, cultural, and social environment of a nation. This is no hidden fact that media alone has the power to choose which issues or events are to be prioritised and also how they would impact public perception about the same. Now, imagine, what if a media organization with a humungous reach becomes a payrolled spokesperson of government?

Canadian media outlets Global news and CTV have constantly been seen as a lobbyist for the Liberal Party and Justin Trudeau. But, CBC, that is,  Canadian Broadcasting Corporation is in an entirely different league in this competition of lies, baked truths, and unwanted propaganda.

CBC is one of the largest news broadcasters in Canada and has local, regional, and national broadcasts and stations. Even today, many Canadians tune into CBC on their TV or surf the internet to keep track of all happenings in Canada. However, CBC has hanged itself in a web of bias allegations. Not from today, but from decades. According to public polls conducted in 2002, the CBC was perceived as being less neutral than other Canadian news organizations, with results potentially favouring the left leaning agenda.

The bias has always been there. Yet, regardless of the journalistic standards that CBC was upholding, Trudeau’s payrolling of the company destroyed everything. The CBC in 2022 is significantly different and only serves as the liberal party’s mouthpiece. Here are ten examples showing the CBC’s payroll-related love affair with Ottawa.

The very same year, Canadians were protesting against Justin Trudeau’s carbon tax introduction. People were on the streets with their vehicles and calling the liberals to scrap the carbon tax and two bills that overhaul environmental assessments of energy projects and ban oil tankers from the northern coast of British Columbia.

The convoy had made it to Parliament Hill shutting down Wellington St. At that time, CBC came out in public defending Trudeau and stressing the protests are happening in just Alberta.

In April of 2022, CBC published a news article on their website that was undisputedly misinformation. According to a “national” survey, the majority of Albertans support the federal equalization program, according to CBC.

The article came to the biassed conclusion that Canadian support for the programs was not greatly affected by the referendum in October, in which 62% of Albertans rejected Trudeau’s plan. Canadian readers and viewers were highly critical of this news article.

Similarly, after the horrendous Colorado mass shooting in the USA, CBC pushed their evergreen story: Bad US thing probably coming to Canada because the conservatives are bad. CBC also put up an investigative piece quoting, How the American anti-LGBTQ hate machine is posing a threat to Canadians with zero proof. It was a mere rant piece.

CBC has also never fallen short of declaring Canadians as idiots for not supporting or even acknowledging Trudeau’s agenda. Once pushing Trudeau’s climate agenda, CBC created really ‘absurd’ headlines like “Climate anxiety is affecting more and more people,” “Global concerns in Canada are higher than in any other country,” etc. No wonder, the concern over climate change is quite higher in Canada than it is in other nations. Oh, wait, because it’s a Trudeau concern.

BC in the open public has accepted that it has spread lies during the freedom convoy protests in 2022. CBC has tried linking the trucker protests with Russian interference, and that too on live television. The Liberal agenda and this vile habit of spreading lies are the only reasons why the CBC has broadly lost its reputation. CBC has even been forced to pay compensation for spreading white lies in a few instances.

As a result of a successful defamation lawsuit brought by a man who claims that the Canadian Broadcasting Corporation (CBC) ruined his life by defaming him, the CBC was ordered to pay just under $300,000 in legal fees in addition to the close to $1.7 million it owes. According to Blacklock’s reporter, this defamation case is the most expensive in Manitoban history.

Read More: Only CBC will be protected in crises at the expense of ordinary Canadians

One could now see and draw the conclusion that CBC is unquestionably not just a left-leaning media company, it also serves as a stooge for Ottawa’s power and receives hundreds of thousands of dollars from the federal budget. CBC has no idea what the media standards of 2022 are. At present, it is nothing more than “Dictator Trudeau’s” mouthpiece for spreading fake news, misinformation, and unadulterated propaganda at times.