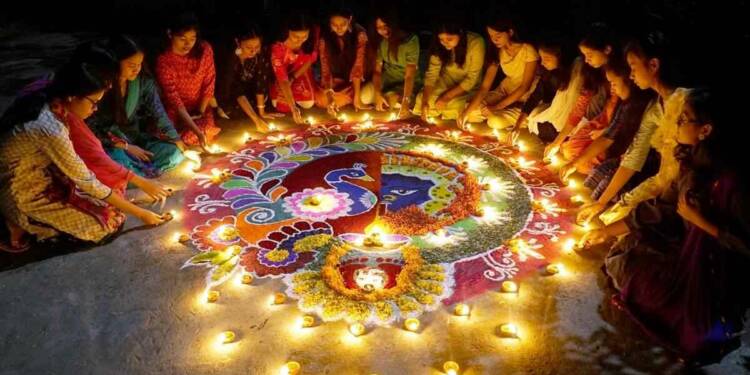 India is a country where most of the festivals are celebrated, The festival of Diwali Festivalis a festival of happiness and prosperity. This five-day long festival is the biggest festival celebrated by the Hindus. In today’s article we are going to discuss about Diwali Festival Essay in English 500 plus words and we hope that it will helpful for you.

The festival of Diwali is celebrated not only in our country but also in foreign countries, its importance can be ascertained from this. On this day, despite the dark night of Amavasya, the whole India is illuminated with light.

The festival of Diwali symbolizes the victory of truth over untruth and the victory of light over darkness. It is not only a symbol of religious faith but it also has social, spiritual, mythological, historical and economic significance.

‘Deepavali’ is made up of two Sanskrit words – Deep + Awali. ‘Deep’ means ‘lamp’ and ‘avali’ means ‘line’ or ‘series’, which means a chain of lamps or a row of lamps. It is also called Deepotsav. In Skanda Purana the lamp is considered to represent the parts of the Sun . ‘Deepavali’ is also called the festival of lights.

Since ancient times the festival of Diwali Festival has been celebrated in India.  History of this festival is different for the people of different states, but most people believe that when Lord Rama returned to Ayodhya after 14 years of exile, the people of Ayodhya lit ghee lamps to welcome him. Also, every road of Ayodhya was decorated with golden flowers.

People of Sikh religion also celebrate this festival with great excitement. They celebrate the festival because the foundation stone of the Golden Temple in Amritsar was laid on this day in 1577. Along with this, the sixth Guru of the Sikhs, Hargobind Singh ji was also released by Jahangir from Gwalior jail on the same day.

This festival of Diwali lasts for 5 days. The first day of which is Dhanteras. On the day of Dhanteras, people definitely take some utensils to their home and people also like to buy gold and silver ornaments on this day. People believe that shopping on this day brings blessings to the house.

The second day of Diwali is celebrated as Narak Chaturthi, because on this day Lord Krishna killed the demon Narakasura. By some people this day is also celebrated as Chhoti Diwali.

The third day is celebrated as main day of Diwali festival. Mahalakshmi is worshipped, as well as Saraswati, the goddess of learning, and Lord Ganesha. Rangoli is made in the house on this day and different types of sweets are made.

On the fourth day of Diwali Govardhan Puja is performed, because on this day Lord Krishna lifted the Govardhan mountain on one of his fingers to save people from the torrential rain caused by Indra’s anger. On this day, women do traditional worship by keeping cow dung outside the house.

The last day of 5 days Diwali festival is celebrated as Bhai Dooj. On this day, the sister ties the Raksha Sutra to the brother, along with applying Tilak, feeds him sweets and in return, the brother promises to protect him and also gives him a nice gift.

When is Diwali Festival celebrated?

The festival of Diwali falls 21 days after Dussehra, on the new moon day of Kartik month between September and October. By the way, the pomp of this festival lasts from Kartik Krishna Trayodashi to Kartik Shukla i.e. for five days. The specialty of the festival of Diwali is that four more festivals are celebrated along with it. The enthusiasm of Diwali is not for one day but lasts for a whole week.

We hope this article of Diwali Festival Essay in English 500 words will be helpful for you to understand the topic.