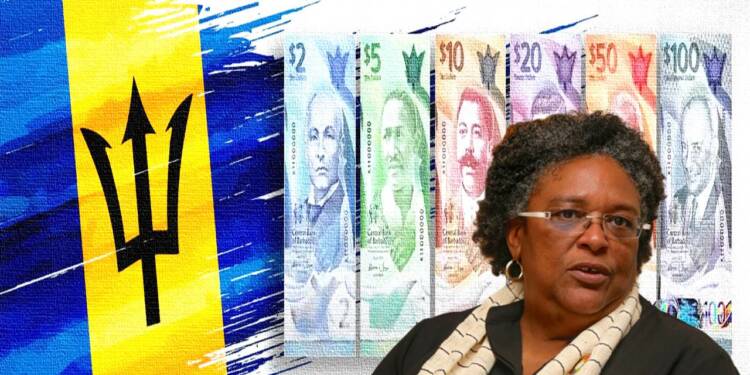 Barbados new banknotes: Money Laundering has become a hot potato for Barbados. Numerous academicians and economic experts have warned about unethical behavior being on the rise in the nation with more people willing to take bribes and lie to watchdog agencies and representatives. People are spending illicit money and hampering the laws of the nation.

So now, the Caribbean’s newest republic is taking steps to avoid the corruption that has hampered neighbors like Trinidad and Tobago. Mia Mottley and her cabinet have started to cure the disease in its initial phase itself.

She furthermore added, “Starting on December 5, we will be issuing notes from the new series to commercial banks, which will then make them available to their customers,” Gibson also affirmed that after the new notes go into circulation, Barbadians will still be able to use older notes. “As we transition from paper to polymer banknotes, the old notes will continue to be accepted as legal tender. Therefore, businesses should continue to accept them.

The Central Bank first announced that it would be changing the design of the banknotes back in April. Since then, the Bank of Barbados, the sole issuer of Barbados’ national currency, has embarked on an education campaign to prepare the public for the change. But, here comes an interesting fact.

For the unaware, the banknotes are developed after a brief period of research. It has been revealed that the Barbados’ new banknotes will have an overall design overhaul; the new notes would be made of polymer rather than the traditional cotton-based “paper” substrate. In May, the Bank unveiled the new designs, which have a vertical rather than horizontal layout, larger portraits, and a cleaner, more modern look. The notes also feature raised marks to assist the visually impaired to differentiate between denominations.

These notes will be more difficult to counterfeit because there are so many features that it would be challenging. Polymer banknotes are more durable since they are more difficult to tear and more resistant to folding and micro-organisms. They also work better in ATMs and automated sorting operations. In addition, they are twice as expensive to produce; they last 2.5-4 times longer than notes printed on the cotton-based substrate. Hence, Polymer notes are also difficult to counterfeit.

Read More: Barbados: A shining star of the Caribbean

More advanced than other

Furthermore, each new Barbados dollar note has a small broken trident in the top right corner that, when held up to the light, reveals the denomination as one of the security features. Under ultraviolet light, a second broken trident and the National Anthem’s highlighted verses on the back comes to life.

The prevalence of counterfeiting in Barbados is low even without the new notes. Just over 100 counterfeit notes were pulled from circulation in 2020, and in 2021 fewer than 60. However, Mottley appears to reduce the incidents to a complete zero.