Germans arrive in Africa to prove their greatness and Russia’s inanity. Cute! 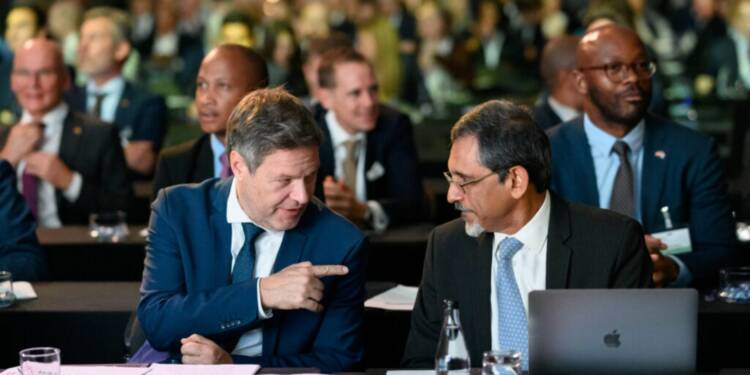 German-Africa business summit: The European Union is working to resolve the crisis sparked by Moscow’s gas supply cuts. It has become clear that the US can do little to prevent an impending catastrophe in Europe as the worst energy scenario for that continent becomes a reality. The US is already experiencing significant disruption as a result of Biden’s faulty policies, and there is also a significant gas and oil crisis. As a result, many European countries, including Germany, attempted to diversify their energy sources by using every trick in the book. Berlin started looking to Africa for rescue. German chancellor Olaf Scholz made an effort to court African states during his maiden trip to the continent in May. However, the Germans have failed horribly in every endeavor to win over the African countries. Germany is in such a precarious position as a result of its excessive dependence on Russian energy and oil supplies that it has begun to gaslight African nations into working in conjunction with Berlin.

“The government will provide additional incentives for investment in regions like southern Africa where it wants to encourage more German investment,” Habeck stated while addressing the conference.

The German-Africa business summit, which is held every two years in a different African country, brings together business and government leaders from Germany and Africa making it Germany’s biggest business event on the continent.

The day before the German-Africa business summit kicked off, Habeck had called for a “restart” and a new approach to relations between Germany, Europe and Africa. The foreign minister is on a five-day trip to Namibia and South Africa.

Make no mistake: Germany’s self-serving objectives are camouflaged behind all the pleasant rhetoric about “restarting” a fresh relationship with Africa. Germany needs Africa as a strategic partner given the disruption to supply chains globally and the weakening of the global economy. Where was the German foreign minister when the West was approached for assistance by African countries during the Covid-19 pandemic? The increased COVID death rates among individuals of African origin were caused by racism, which had its roots in enslavement, colonialism, and apartheid, as was evident to everyone on world.

Furthermore, the recent assurances are empty words. Only over 1% of Germany’s total foreign direct investment worldwide is invested in Africa. This amount is minuscule, and it has remained constant for years while other nations have boosted their African portfolios.

The German vice chancellor also donned a contemptuous visor and verbally berated African nations for supporting Russia. He claimed that Moscow was using food and energy as weapons against Africa, Europe, and Ukraine. Well, this certainly looks like a classic case of the pot calling the kettle black. The last people who should speak about “weaponizing resources” against African nations are Western leaders. The entire world has witnessed the long-standing plunder of Africa by Western nations. Servitude of Africans served as the foundation for the opulence of the West.

However, after being oppressed and subjugated for eons by colonial empires and fraudulent power structures, the African continent is beginning to feel more integrated and show signs of rebellion against Western coercion.

African nations have started making attempts to take advantage of their abundant resources and modernise their infrastructure in order to support their growing economies.

African nations no longer readily submit to intimidation from the world’s superpowers. Instead, they resist against what they see as American hedonism and tyranny. The West must stop assuming that emerging democracies would support them. The era of uni-polarity, during which the US led Western bloc could manipulate the foreign policies of other nations and limit their sovereignty, is over. African nations are currently growing more assertive and confident. Western authorities’ arrogance and neo-colonial language condemning the nonalignment of African countries would only push these countries to limit their ties with the West.

Kotilingeshwara Temple – History, Facts and how to reach