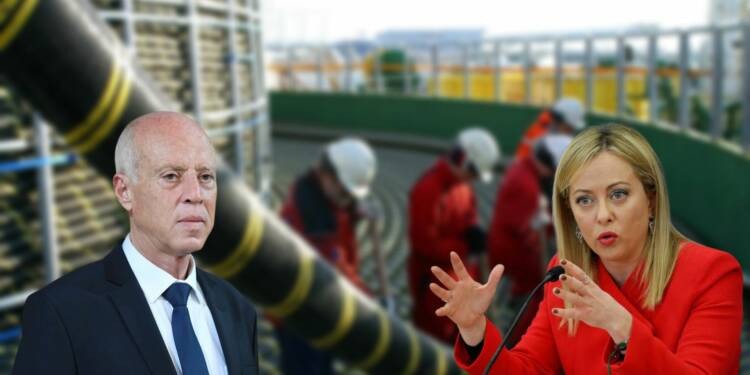 Italy Tunisia energy deal: We once said Georgia Meloni is a ray of hope not only for Italy but the whole of Europe and now she is proving that claim. Owing to the Russo-Ukrainian conflict, and the retaliatory European sanctions against Russian gas and oil, the EU incurred a heavy loss. The continent got caught in the grip of an energy crisis due to halted gas supplies from Moscow. The continent’s energy situation is threatening as well as questioning the ability of governments to keep people warm during the upcoming winters. But, the government in Italy has done its part.

It won’t be far-fetched to call the Prime Minister of Italy a messiah for the step she has taken. She has joined hands with Africa in order to make Southern Italy an ‘energy hub’ in Europe. At a time of crisis, this might come as music to the European’s ears as the plan is bound to benefit not only Italy but the whole continent.

Italy and Tunisia have recently sealed an energy deal that involves the construction of a new submarine power line that will transport clean energy from Tunisia to Italy. The project has also been given a green light by the European Commission.

According to the Environment and Energy Security Ministry, this was a “decisive” step towards making southern Italy an “energy hub” in Europe, which will “strengthen the continent’s energy security.”

Following the commencement of the war in Ukraine, the EU’s most pressing concern is the energy crisis, and it is working on collaborative solutions for a sustainable alternative to Russian gas.

Terna Spa and STEG Tunisie will construct the undersea power line, which will connect the Tunisian Cape Bon peninsula to the Partanna electrical facility in the Sicilian province of Trapani.

Partanna already has an energy station, but a new one will be developed to convert direct current coming from this line to alternating current. Terna promises that the new station will be built “with architecture and colours in harmony with the landscape and surrounded by a natural barrier of trees.”

The Italian company says, “Attention to the territory and the environment is a firm point for Terna, and this project also combines technical solutions with the lowest possible impact.” (sic)

The ‘Tunita’ power line, which will transport energy from Tunisia to Italy, has been added to the list of Projects of Common Interest (PCI) and will cost €850 million, of which €307 million will be co-financed by the Commission through the ‘Connecting Europe Facility’ (CEF), the EU fund earmarked for the development of projects to upgrade the EU’s energy infrastructure.

This is the first time that CEF funds have been utilised to build an intercontinental infrastructure that connects an EU country with a non-EU country.

Terna CEO and Managing Director Stefano Donnarumma called it as “an opportunity for Italy to concretely become the energy hub of the Mediterranean.”

“It is a great Italian success,” said Prime Minister Giorgia Meloni. “It is in Italy’s destiny to become a new energy hub for the entire European continent, it is in our mission to intensify cooperation with Africa to bring investment and development (sic),” she added.

For long, the EU kept undermining Africa’s role in the fast-changing global political landscape. Today, the same European elitist nations are lining up in Africa with a large begging bowl in their hands. It’s the best time for the African countries to make the most of the European energy crisis.

Moreover, the Italian conservative leader Giorgia Meloni has proved her competency in tackling the energy crisis that had hit the continent and emerged as a pan-European leader. After taking this step she is sure to be viewed as a ray of hope in the times of an ongoing deadly crisis.