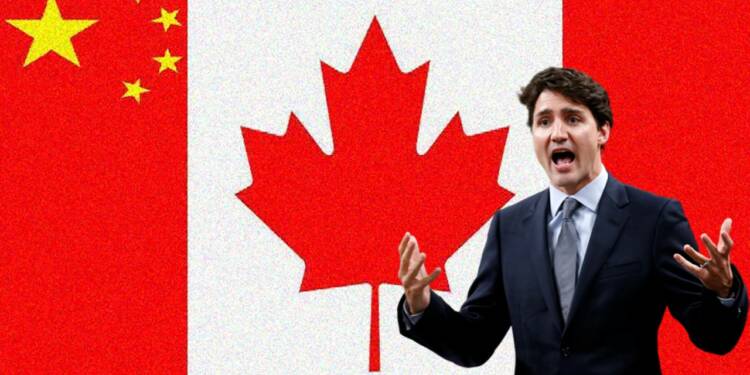 BlueDot Canada contract: Two years ago, the world was stormed by a virus that no one was ready for COVID-19 or what we say the Chinese virus. Officially, the pandemic has claimed the lives of more than 6,700,000 people in the last two years, and unofficial estimates place the death toll at well over millions.

Countless lives were taken away by this pandemic as unpreparedness was the primal cause. What if, though, we say that Ottawa was already aware of something truly uncanny approaching them before the pandemic even began? What if Trudeau’s master in Beijing had already alerted his puppet to make money out of misery and did Trudeau sell all of the country’s healthcare data, as a thankful gesture? The Scandalous liberal party government today has many questions to answer.

Let’s roll back to march 2020. What do you guys remember, fear, isolation, and lockdowns right? But, there were only two nations in which Lockdown was not at all imposed. The United States of America and Canada. The US was against imposing a lockdown because of course, Trump wanted the world to take a stand against China. However, Canadian PM Justin Trudeau was not imposing a lockdown because he already knew China already had the plan to save him.

Even before the start of the Pandemic, Canada’s Public Health Agency had signed its first-ever contract with cellphone-based pandemic-monitoring agency BlueDot in November of 2019. A full month before the pandemic was made official.

Why did the Public Health Agency of Canada sign its first ever contract with cellphone-based pandemic-monitoring agency BlueDot in November of 2019… a full month before the pandemic was detected in China? https://t.co/6pD8szObPS pic.twitter.com/iA9RGv12E7

Toronto-based BlueDot Inc.’s platform was among the first to detect an unofficial report in China on Dec. 31 about several cases of unusual pneumonia.

Immediately after the signing of deal, the collaboration between China and Canada had suddenly increased. If one remembers, in may 2020, the National Research Council of Canada and China’s CanSino Biologics Inc. worked together to “pave the way” for future trials in Canada. Not only this, Canada was able to produce PPE kits and other test requirements on a broad scale in Canada. According to a tweet by Real Andy lee show, Canada’s PPE kits were assembled in a warehouse with a fake storefront in unsanitary conditions using Chinese labour. The workers say they were mistreated.

China and Canada collaborated in the pandemic by every means and every extent. However, a really gloomy side of this story is that China possibly has every crucial health care data of Canadians. From health ailments to medication, CCP might know you from what you are suffering more than you.

The use of data by BlueDot itself to model and forecast epidemic outbreaks and planning its response is well known. However, where is all of this data which the company is using gets stored? The answer is pretty obvious, China. China has a dark history of stealing data. It has numerous banking apps, gaming apps and even social media apps, which have constantly been alleged for data stealing. In addition, the owner of BlueDot Inc., Li Ka-Shing, is an ardent supporter of CCP’s agenda, which is where things get interesting. Li Ka-shing once asserted that China has a right to uphold the Hong Kong Security Law, which was a hot potato debate for the world a few years back.

Read More: Canada’s mining industry is officially in the clutches of USA and China

Many questions are now being raised over Trudeau’s decision to sign a contract before the pandemic started. Make no mistake, even before COVID-19 was formally identified, this was more of a pandemic control deal with the CCP. There needs to be an explanation for Trudeau’s illegal cooperation with Chinese businesses that have such a terrible attitude toward data theft. Was it a pandemic or a plandemic for Trudeau?