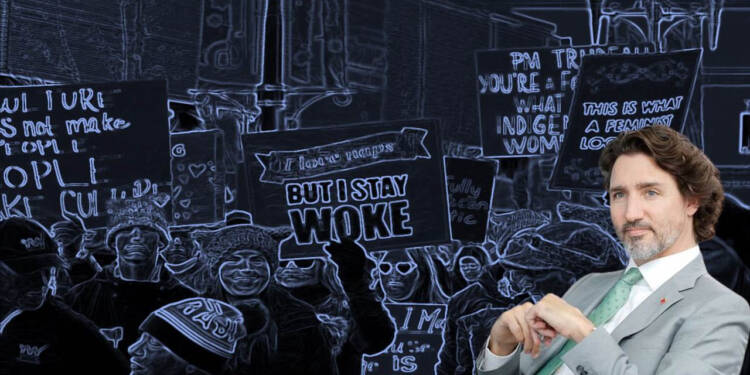 Look what has happened to Canada. A country so wealthy and resource-rich when fell into the hands of a woke leader turned into a hell of a place to live in. Justin Trudeau has been outrightly supporting and funnelling hefty sums to his woke agenda and that has made the future of the country look bleak.

Nowadays, people marching wrapped around rainbow-coloured cloth, and holding rainbow flags and banners supporting the LGBTQ program on the streets are a frequent sight in Canada. All this is a result of Justin Trudeau and his woke policies. Recently, a territory in Canada came up with a plan as bizarre as it may sound. On Friday, the Yukon government revealed that new reforms to the territory’s healthcare insurance plan will allow people to claim “gender-affirming” services at taxpayer expense.

The new coverage is available to all Yukon residents enrolled in the Yukon Health Care Insurance Plan. “This addresses the gap Yukoners faced when accessing gender-affirming care offered in private facilities,” a news release explains.

One year ago, the territorial administration announced plans to enhance access to “gender-affirming health care, including surgery.” Some transgender people seek sex-change surgeries to confirm their gender identity.

Top and bottom surgeries, as well as hormone therapy, are common operations. The idea is devastating in itself but what is more upsetting is that the taxpayers’ money is being used for wokeism now. Moreover, the federal liberals are not doing justice to the taxpayers by invoking such a plan.

“The Yukon is leading the country in advancing access to gender-affirming surgical and non-surgical procedures and services, and our commitment to providing this coverage has never wavered,” said the territory’s Minister of Health Tracy-Anne McPhee.

“We recognize the past few months has been uncertain for the 2SLGBTQIA+ community, and we are very pleased to announce this amendment to regulation, so Yukoners can access the care they need and deserve.”

Ever since taking the baton, the liberals have been actively focusing on issues of gender inclusivity, gender identity etc. neglecting the ones that stand in the need of urgent attention. In August, the federal government modified the Public Service Health Care Plan in August to include coverage for “gender-affirming care” of up to $75,000.

“New features of the Yukon Health care Insurance plan include increased support for mental health and well-being, such as increased coverage for psychological services and an expansion of mental health service providers,” the federal government explained.

Now, this may be seen as a positive move by the young people who are already becoming “fools” and have become engrossed in this bogus agenda. But in reality, it’s not. This is a pilot program for mass castration that is gradually taking place all around the western world, especially in Canada.

In my opinion, the federals are committing a heinous crime against the youth by playing with their sexuality. Trudeau’s whole cabinet is full of lovers of the LGBTQ program but what’s more troubling is the fact that the taxpayers’ money is being used for spreading wokeism in the country. It is a reversal of natural order to use someone’s money against their own interest. Trudeau is simply disincentivizing them from earning more dollars or paying more taxes in future. Now you see why wokeism is called a mind virus.