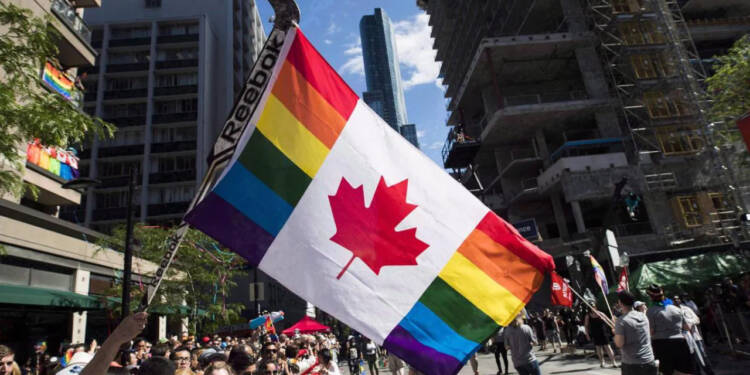 Dear Canadians, you are fortunate to reside in a wealthy country with a wide resource base, as a result of which you are still seen as having a robust and diverse economy.

But, you must have noticed, nonetheless, that your stature of significance on a global scale is dwindling. and all too quickly. Why?

Why has your country, which was formerly seen as a major international actor, suddenly fallen out of favor? Is this a result of Trudeau? No, it is because of you that you have become confused by the liberal agenda and lost your senses.

You have been reduced to a simple hamster for the New World Order’s experiments. Don’t you believe us? Watch and listen, to understand what’s going around you.

If $500,000 was put toward defence manufacturing, Canada’s military might reach new heights. Unfortunately, though, this money is going toward the ridiculous cause of children’s gender transition.

Ladies and gentlemen,  One of Canada’s most renowned banks, TD Bank has donated $500,000 to the Pediatric Gender Diversity Program and is now financing kids’ gender changes.

The financing, which was originally disclosed covertly in May, will reportedly be used to provide roughly 30 children under the age of 18 with “gender affirmation” services, such as medical transitions and other things, according to a media source. This is actually happening, and it is not a joke.

The program will also give complete medical referrals and legal referrals, such as changing gender markers and a person’s legal name on identification.

A whole generation in danger

This may be a positive move for the young people who are already becoming “fools” and who have become engrossed in this bogus agenda. But in reality, it’s not. This is a pilot program for mass castration that is gradually taking place all around the western world.

How is this castration going, one could ask? Take a dog, for instance. The most typical change that occurs in a dog after castration is in its behavior. They exhibit less aggressive behavior toward other male dogs and exhibit less sexual activity. They also try to scarper away from attracting female dogs.

Now, what takes place when a man undergoes a transition and is identified as a woman? You just got your answer, males experience less sexual interest and the same biochemical and psychological changes as dogs.

And this is just one instance, in which Canada is loaded with such heinous crimes against the youth.

The liberal government has been pushing forward this woke agenda. Recently, the Trudeau government also pitched in with a five-year, $100 million initiative to support 2SLGBTQI communities across the nation further the issue.

But one needs to be concerned about why, over the last decade, these events have started to occur so often in Canada. We think the New World Order, which is supported by the WEF, is responsible for all of this.

The ruling class, which includes Bill Gates, the Rothschild family, and WEF founder Klaus Schwab, wants to govern the globe through illogical organizations and foundations that have nothing to do with their actual fields of expertise. But because they are wealthy and freakishly rich, they want to rule the entire planet.

Nobody can deny Klaus Schwab’s love for the LGBTQ+ community. Trudeau’s whole cabinet is made up of WEF supporters, and TD Bank is also a member of the WEF. This just strengthens the fact that WEF is actually running Canada, at this moment.

While the economy is in freefall, the healthcare sector is in trouble, and the education sector is struggling, young people are unconcerned. Why? Because for them, a pride march is all that matters.

According to them, a male who identifies as a female should win in a beauty contest, and children as young as five should be exposed to booty dance.

The NWO is developing the west in this way, and Canada is their goddamn laboratory for such experiments. 30 years ago, Canada was not what it is today—it was not a gloomy Gotham City. You should be angry and frustrated because the WEF and these elites are destroying you.