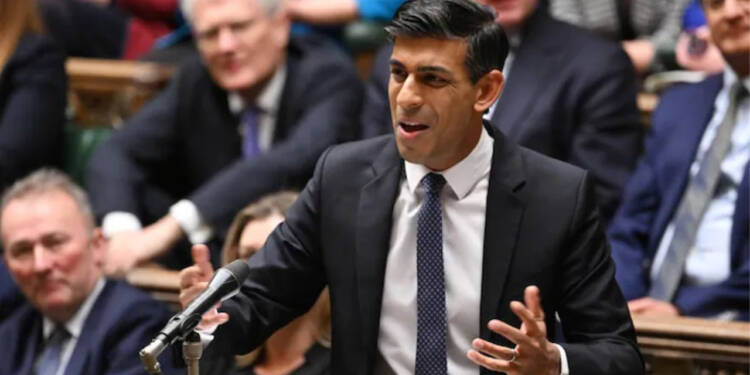 UK illegal immigration: Enver Hoxha, who died in 1985, was one of Europe’s most enduring and feared communist tyrants, creating a cult of personality that left the impoverished Balkan nation of Albania with only grandiose statues, marble busts, and giant portraits in his honour. Since his fall, Albanians left their nation like there was no tomorrow. And most of them had arrived in the UK. But sadly, most of those who arrived in the UK illegally settled themselves in criminal streets.

The former leaders of the United Kingdom did not take a firm stance against these criminal mindsets. But, UK’s brown boy Rishi Sunak has come out as an exception. The illegal Muslim migrants are currently shivering in fear because the UK has decided to throw all of them out.

According to a media report by Reuters, UK PM Rishi Sunak has announced his plan to bring the new legislation to prevent the arrival of Albanian migrants who cross the English Channel to reach the UK. Reportedly, the UK government wants to control a surge in people arriving in small boats on its southern coast. The number of migrants arriving in England across the Channel has more than doubled in the last two years, with government figures showing Albanians account for the highest number of people arriving by this route.

The Prime Minister has also stressed that he will deploy UK border officials in Albania, to make the UK a “safe, prosperous European country” again.

Sunak is unveiling a brand-new, five-point strategy to combat illegal immigration in the UK. The plans call for a number of actions, such as accelerating the return of asylum seekers from Albania and halving the number of caseworkers to clear the initial backlog of nearly 150,000 asylum cases by the end of the following year.

In addition, Sunak has firmly warned, “If you enter the UK illegally you should not be able to remain here, Instead, you will be detained and swiftly returned either to your home country or to a safe country where your asylum claim will be considered.”

Echoing her tone, UK’s interior minister, Home Secretary Suella Braverman had also called the wave of Albanian migrants arrivals an “invasion” and described many of the migrants as “criminals”, leading to an angry response from Albanian prime minister Edi Rama. UK Border Force officers will also get posted to Tirana airport, and caseworkers in Britain will be issued with new guidance naming Albania as a safe country.

Sunak has stressed, authorities in Tirana have offered formal assurances that they will protect “genuine” victims and those at risk of re-trafficking. And so, over the coming months, thousands of Albanians would be forced to return home.

Well, UK’s decision to send all of the Albanian migrants home is undoubtedly a welcoming step as the step will unquestionably help the UK reduce the rising gang wars. However, this step is definitely not a sudden one. The calls have been coming for a long haul, it is just that the white predecessors of the United Kingdom lacked the guts to go harsh against it due to ”political correctness”.

Dan O’Mahoney, UK’s Clandestine Channel Threat Commander in UK’s parliament had briefed, “There are undoubtedly people who need our help. But, there is a large number who are deliberately gaming the system.” Here gaming means that they were abusing the system.

He went on to highlight the negative role of Albanian criminal gangs in the UK. Citing the NCA data, Mahoney stressed, Albanian gangs, are responsible for importing industrial-scale cannabis farming to the UK and are also leading players in the UK’s £5bn cocaine market.

In 2017, an Albanian national was also imprisoned after running a cocaine-smuggling operation worth an estimated £60m. The Albanian gangs have been calling from Albania to the UK via TikTok, according to a Balkan Insight report from August this year. The adverts offer to take people to the UK from France on boats or from Belgium in lorries, at a cost of £2,000-5,000 each.

Read More: Biden readies Albania for sacrifice at the altar of his geopolitical miscalculation

This whole network was being run in the UK by illegal Muslim Albanian immigration. But Sunak now basically has the entire nexus at his foot. The UK is prepared to break up this nexus entirely. And so, the Albanian migrants who could have simply lived their lives in the UK in a peaceful manner are now crying foul. Well, keep crying because Karma always strikes back.

Barbados creates a protective shield around itself