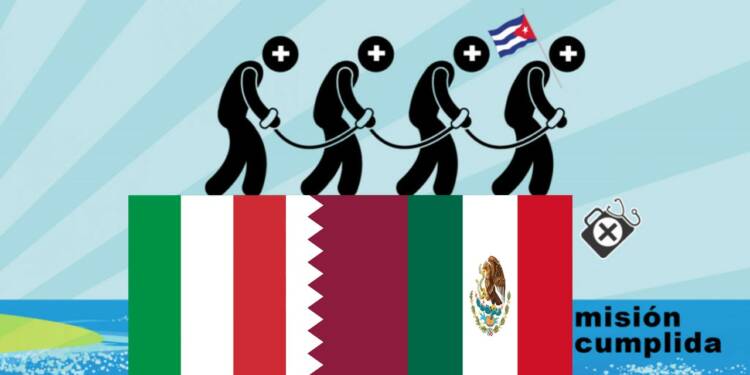 The first organized slavery in Cuba was introduced by Spanish colonialists who attacked and enslaved the island’s indigenous people. Cuba’s original population was destroyed completely, partly due to lethal forced labor. Till the 18th century, Cubans were exploited and enslaved by the west. It was the year 1886 when slavery was formally abolished in Cuba. However, modern-day slavery still continues. Not in the open, but, through gloomy and sneaky measures.

Despite such a tumultuous and dark history, Cuba has still failed to learn from its past. The Cubans this time have found themselves stuck in a Bermuda triangle of slavery. According to a media report by 14yomedia, A Madrid-based organization, Prisoners Defenders (PD) has launched a harsh critique toward the governments of Mexico, Italy, and Qatar for contracting Cuban professionals in “conditions of slavery.” Reports further suggest that the formal charge against these governments is supported by the active role that the governments of Mexico, Italy, and Qatar played a crucial role in the hiring of Cuban medical professionals on compensation for the Cuban government under slavery-like terms. The organization has sent its investigative findings—along with an expansion of the complaint—to the ICC and the UN, emphasizing that the three countries actively participate in slavery schemes.

The Cuban regime’s primary source of hard currency is its temporary migration program for health professionals to “friendly nations,” which pays each professional while subjecting them to contract conditions that go against international standards for decent labor and push “the human condition to its limits.”

The three nations have reportedly not followed the norms under which, the agreements were actually signed. According to the report, health workers cannot participate in public events without the authorization of authorities, nor issue statements on social media without receiving instructions.

The countries where they work also subject professionals to precarious conditions, the organization reproached. For instance, in Mexico, there is a 6:00 pm “curfew” after which the medical health experts cannot leave their assigned residence.

Another nation with a presence of Cuban medical personnel is Qatar. According to the media reports by the Guardian, Qatar stressed that it paid Cubans between 5,000 and 10,000 dollars per person. However, the real side of the story is that only 10% of the contracted salary is given. This income falls below the poverty line in the country that produces the oil.

In addition, none of the workers went to Qatar voluntarily but rather were coerced. The Cuban doctors did not receive a work contract and did not know their final destination until they reached the final destination. In a similar way, even Italy has been accused of not paying the doctors the salary that was offered to be disbursed.

These are the few instances that have been stressed within the report for violating international laws. And it proves, history hasn’t changed till now.

There was a time when Cuba became the largest slave colony in all of Hispanic America, with the highest number of enslaved persons imported and the longest duration of the illegal slave trade. It is anticipated that more than 600,000 Africans were taken from West Africa and shipped to Cuba over three centuries, with tens of thousands dying during the brutal Atlantic Crossing.

Most of these people were brought to Cuba between the 1780s and the 1860s, as the slave population rose from 39,000 to 400,000. The U.S. slave trade to Cuba was illegal after 1794 and formally, slavery ended in 1886. Still, these new reports prove the fact that modern-day slavery still continues.

Read More: Clear signs are here that the US is afraid of Cuba- Haiti alliance

Those who take away someone’s freedom do not deserve their own. Cubans are still considered slaves by the rest of the world, and these news reports demonstrate that Italy, Qatar, and Mexico continue to vehemently support such practices. Wonder what others might be doing?