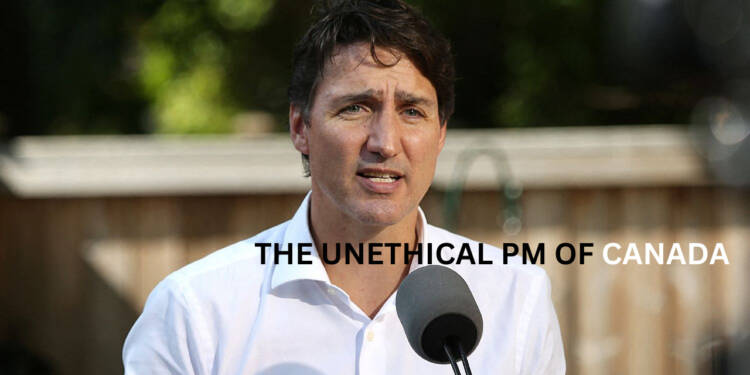 Corruption is cancer. A Cancer that eats away citizens’ faith in democracy, eats away the prosperity of a nation, and eventually, degrades the innovation and creativity of a nation. The majority of Canadians were tired of the Harper era, which is why they fervently supported Justin Trudeau in the 2015 election. Eight years later, things have gotten significantly worse. Canadian Prime Minister Justin Trudeau has embarrassed his countrymen and put the great white north to shame.

Additionally, Trudeau’s ministers have comforted themselves with the corrupt system. All of this happened despite the fact that the Canadian Ethics Committee discovered that the Liberal Party of Canada is living a luxurious lifestyle in the name of governance.

According to a media report by CTV, Canadian International Trade Minister Mary Ng violated the Canadian Constitution by giving a significant government contract to a friend, according to the federal ethics commissioner. In the spring of 2020, the public relations company Pomp and Circumstance received a contract from Mary Ng’s office. This was a potential violation of conflict-of-interest laws despite the fact that it was only worth a little under $17,000 because Ng and Amanda Alvaro, the firm’s co-founder, are friends.

Now, you will ask was the Canadian trade minister fined, or was she penalised? The answer is No. The minister has simply apologized and moved on with her work. This is the ethics committee ladies and gentlemen, which has never raised a single voice against Trudeau and the company.

Starting with the Trudeau Report from 2017. In this report, the holiday trip in which Justin Trudeau accepts a complimentary Christmas vacation for friends and family at the opulent private Caribbean island of the Aga Khan. At that time, the Ethics Commissioner had investigated the matter and found that Mr. Trudeau broke three rules of the Conflict of Interest Act.

Yet, no stringent action was taken so that it doesn’t happen again. Cut to 2019, another investigation related to Trudeau came out. It was found that Trudeau pressured his then attorney-general, Jody Wilson-Raybould, to give SNC-Lavalin, a Quebec-based multinational engineering firm charged with corruption, the deferred prosecution agreement it was seeking.

The Ethics Commissioner ruled out that the Canadian PM used his position of authority to influence another person in the defense of the company’s private interests, resulting in another violation of the Conflict of Interest Act. The year 2021 came with the big-budget drama Morneau II Report, in which Canada’s finance minister at the time, Bill Morneau, broke three laws by giving the WE charity preferential treatment and allowing his staff to disproportionately aid it when it applied for federal funding.

And now, just on the eve of Christmas, we have Ng Report, in which the Minister of International Trade, Export Promotion, Small Business, and Economic Development, racks up her own trio of ethical transgressions by awarding two contracts worth a combined $22,790 to a PR firm run by a close friend.

Despite all this, the irony here is that the Canadian Ethics committee has failed to even make a strong judgment against Justin Trudeau and his friends. Whereas, all of them continue to make millions and make a buffoonery of Canadian taxpayers.

These are just a few cases that show the ethical committee of Canada is not performing up to the mark. There are also several independent investigations, which also prove and show ministers like Jody Thomas and Ian Shugart are making a mockery of the Canadian constitution.

This way or that way, the Canadian unethical ethical committee has made only Trudeau and Co richer day by day. It appears to be supporting Trudeau’s administration and helping them to make millions. Now, this is corruption at its peak.