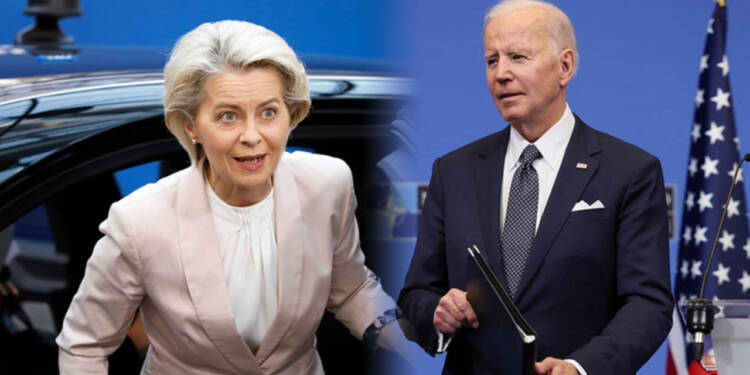 The West and the EU’s madness of making the countries a ‘green haven’ never lets them sleep carefree. They keep on making and scrapping policies in the wake of green activism. In a similar fashion, recently the EU is pushing on its food sustainability standards. Well, this is no news but the US opposing it certainly is. The EU’s ambition to hold third countries’ food imports to its own sustainability standards has come as a marmalade dropper for the US. But, why is a step in the direction of the West’s green agenda meeting with consternation by the US? Let’s dive into the video to know why.

The EU’s desire to subject third-country food imports to its own sustainability standards has sparked concern among stakeholders in key trading partners such as Brazil and especially the United States. As set out in the EU’s flagship food policy, the Farm to Fork strategy, EU trade policy should “contribute to enhance cooperation with and to obtain ambitious commitments from third countries in key areas”.

This includes critical issues such as animal welfare, the use of pesticides, and the fight against antimicrobial resistance in efforts to “promote the production of agri-food products conforming with high safety and sustainability standards”.

And there has recently been a flurry of legislation aimed at making this a reality, including a new deforestation law, discussions about stopping the export of banned pesticides from the EU, and efforts to apply animal welfare regulations to imported products. Although the move has been welcomed by EU farmers and green activists, the EU’s push on sustainability has sparked concern in third countries including Brazil and the US.

“The European Commission is asking more and more from other countries outside of Europe to do certain things of which, if you go there, you see that that’s a stupid question,” Jurgen Tack, scientific director at the European Landowners’ Organisation (ELO) said during a recent event in Brussels focused on driving forward sustainable food production across Brazil and Europe.

This is because “either it’s impossible to do so, or there is no need to do so,” Tack explained. Similarly, Vincius Guimares of the Brazilian Agricultural Research Corporation (Embrapa) emphasised the rarity of tropical growing conditions.

“Conditions are different, and so the use of different products and inputs is necessary because of that,” he explained.

Likewise, tensions in the US are rising over the EU’s goal for a greener future. “If you feel that is right for Europe, go ahead – but don’t impose it on the rest of the world where we’re focused on finding and growing the proteins to feed the world,” Ted McKinney, chief executive of the US association of state departments of agriculture (NASDA), told an event on transatlantic relations on 5 December.

For McKinney, the EU and the US are “certainly on opposite ends of this whole thing”. “This is going to boil to a head, and it’s not going to be pretty,” he warned.

But, why is anything complying with the green agenda perturbing the nerves of the US? Perhaps, opposing the move means business to the US. You see, nitrogen fertiliser shipments from the United States reached a multi-year high this summer, as rising natural gas prices in Europe increased the cost of generating the crop nutrient there.

Since Russia invaded Ukraine, the EU started weaning itself off Russian natural gas and a pipeline transporting ammonia from Russia which led to a surge in imports from the U.S., the world’s third-largest producer. According to U.S. Census Bureau data, exports from the U.S. soared to 370,000 short tons of nutrients in August, which is more than double the year-earlier total.

European buyers started outbidding domestic buyers in the U.S., but the recent statements by the EU are no music to Washington’s ears. The US is having high fever upon hearing about the EU’s sustainability standards as it used to divert a large share of supplies to Europe. Hence, Europe has rung the death knell of Washington’s business ambitions which just started to boom.