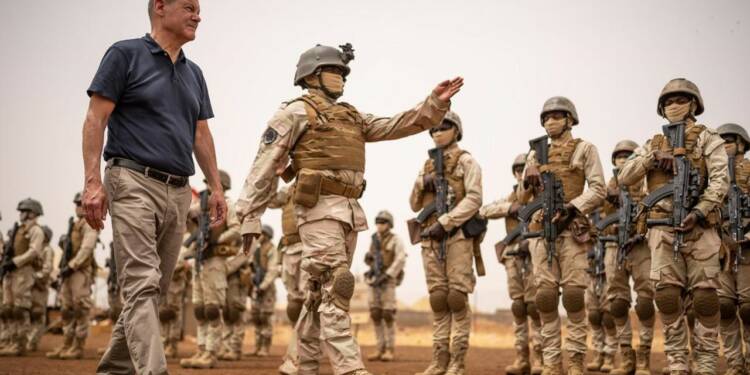 The Sahel region in Africa is one of the richest in the world in terms of natural resources including oil, gold and uranium. However, ironically it is also one of the poorest and most conflict-ridden regions in the world. As per reports, armed conflict in the region has forced more than 2.5 million people to flee their homes in the last decade.

France’s years old counter-terrorism mission in Sahel, named Operation Barkhane had to be ended after a growing anti-French sentiment in the region coupled with Russia’s rise in Africa. France despite being present for years to counter terrorism in the region failed in its mission and the region had only further slid into chaos.

France was criticised for failing to bring security and for playing a colonialist’s role. Moreover, there are claims that France itself abetted insecurity and were hand in gloves with Islamists. Finally it was driven out of the region which coincided with the rise of Russia’s Wagner group. However, the West’s insatiable greed for power has no limits. Now, as French troops left Mali ending its nine-year operation in the country, Germany seems to be trying to take the advantage of it.

Germany to contribute to EU mission in Niger

As per Reuters, German Defence Minister Christine Lambrecht has said during a visit to the country, Germany will play a substantial role in a planned EU mission in Niger. She even told reporters that “We are not leaving the Sahel on its own,”.

As per reports, EU foreign ministers have paved the way for a three-year military mission to Niger to support the country in its fight against armed groups. Some 50-100 European troops at first and up to 300 at a later stage are to help the country improve its logistics and infrastructure. On the other hand there are some 1,100 German troops based in neighbouring Mali. This mission however has been plagued for a while due to political friction with Mali and an increasing Russian military presence in the country.

This statement by Germany has come at a time when the country’s leaders have been wooing various African countries to secure hydrogen supplies. We at TFI explained to our leaders earlier how Germany has big dreams of becoming the global leader in hydrogen tech.

Africans have become more and more suspicious of the West and its neo-colonialist agenda. They have finally realised that the West has only used them only to meet their selfish geopolitical goals. Despite years of Western military interventions it has not just failed to bring peace and security but in fact created more crisis. Countries like Mali, Burkina Faso, Central African Republic are already strengthening ties with Moscow now to fight insurgency in the country. On the other hand, the West currently has much more to worry about than what is happening in Sahel.

On the other hand, it is only likely that Russia will get more and more African countries on its side the West. There is a strong possibility that Niger is its next target. Recently, several hundred people have peacefully demonstrated in Niger’s capital Niamey against France’s anti-jihadist Barkhane force while praising Russia. They also raised slogans like ‘Barkhane out’, ‘Down with France’, and ‘Long live Putin and Russia’.

Thus, Germany’s mission will have to face Russia’s Wagner which has been largely successful in eliminating insurgency in Africa and creating pro-Russian sentiments, unlike the West. Keeping in mind all this, it is not too much to say that Germany will fail in Niger.

Kukke Subramanya Temple Timings, Travel Guide and how to reach

Triyuginarayan Temple, Rudraprayag travel guide and how to reach