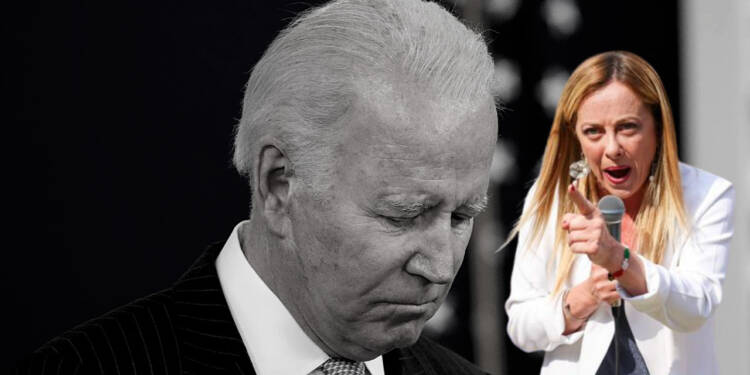 The US has been digging EU’s grave and Germany has been helping it out. Germany is that mindless stooge of the lot which agrees to toe the lines of the US even if it means its own death but the rest of the European countries are suffering owing to that bonhomie. But, now it’s high time. Countries are coming up against Germany which has been busy pushing the continent into a catastrophe till now.

Recently, US Inflation Reduction Act (IRA) met with consternation within Europe and France was the first to voice the concern. But now, it seems that France has been joined by another European power Italy in the game.

The US Inflation Reduction Act (IRA) is becoming a bone of contention between the European powers. The contentious law in question is bound to hurt the economic interests of the bloc’s industrial heavyweights including the likes of France and Italy. French President Emmanuel Macron has gone up in arms against the law but Germany continued to pose as a spoilsport. However, the game is now joined by strong opponents which can prove to be a setback for Germany which has been eating into the EU’s coffers for so long.

Another European power Italy is now urging the EU to give a befitting response to the US’s IRA. On Saturday, Italy’s economy minister encouraged the European Union to respond forcefully and strategically to the US’ Inflation Reduction Act (IRA), which he said posed threats to the national economy.

Read More: France goes all out against Germany for siding with US

“Some Italian companies are considering moving production to the U.S. following the IRA scheme, it would be a disaster,” Economy Minister Giancarlo Giorgetti said at an event in Rome.

The EU is concerned that the $430 billion IRA scheme, with its large tax advantages for domestic production of energy sector components, could entice EU businesses and disadvantage European firms ranging from automobile manufacturers to green technology developers.

The US’s stepmotherly treatment of its EU partners has been evident ever since the war started. The EU is fighting Washington’s war in Ukraine that led to Europe’s resource depletion, propelled the continent into an energy crisis, then left the continent in the lurch and now it’s asking for more. Washington is that crack in the dam which is filled with despotism but wants to rule the world as per its own whims and fancies. And in a similar fashion, it is now expecting Europe to accept its new legislation that only supports electric vehicles assembled in North America. The EV and automobile sections of the Inflation Reduction Act (IRA) are both against international trade laws and the growing economic relationships with the US.

According to the Inflation Reduction Act, domestically produced electric vehicles are eligible for a $7,500 tax credit. Starting in 2023, the tax credit is subject to new limits. Vehicles must still be produced in the United States, but there are now stricter requirements for the mineral composition and the components of EV batteries.

So, the new legislation of the US is bound to hurt the bloc’s industrial heavyweights like that of France and Italy’s automobile sector the most among other countries and hence Emmanuel Macron and now Giorgia Meloni have decided to bring the European Union together in a bid to counter the US multi-billion dollar strong Inflation Reduction Act (IRA). France resorted to creating a common European funding backed by Brussels to oppose the act but the scheme is hedged with the US’s pet Germany’s restrictions. However, now Italy has landed into the game with its urge of a strong retaliation to the US’s contentious act.

The EU’s madness of working under the shadow of the US has served in favour of the latter’s economic interests while proving to be a setback for Europe. But, for how long will the European countries face the brunt of the US’ self-centred policies?

Jamaica is the ‘Jamtara’ of the Caribbean. Even foreign hackers acknowledge it