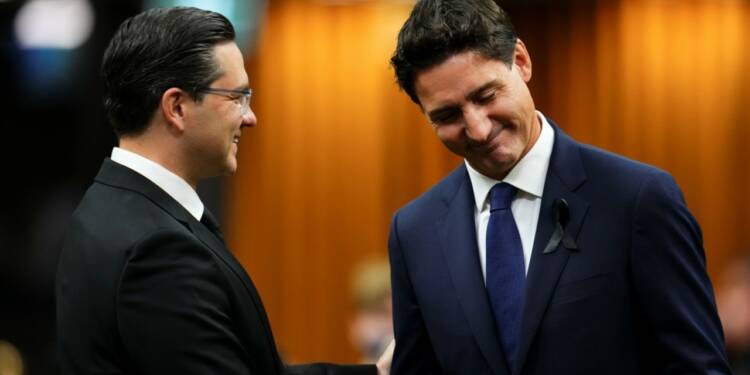 Despite the fact that Trudeau only won the last federal election, there are rumours in the ranks that suggest his position at the top might not be safe. Prime Minister Justin Trudeau’s Liberals should start to get off their high horses and accept reality that the prime minister is receiving more unfavourable reviews. The overwhelming majority of Canadians believe their nation is moving in the wrong way.

Seven years have passed since Justin Trudeau first led the Liberal Party to power and almost ten years since he assumed that position. Many people who initially supported Trudeau’s rise to power have also lost faith in him as a result of his broken promises or his poor management of the team he brought to govern.

More than a few have simply grown weary of his presence and have started to feel he is outlasting his welcome. But Trudeau continues to daydream. Even after being presented with a ton of empirical facts, the liberal poster boy’s excessive vanity precludes him from accepting the deteriorating situation in Canada under his leadership.

“Canada is not broken,” Trudeau told Liberal MPs and donors at a Christmas party last week. He was taking aim at Poilievre’s recent statements that “everything feels broken” which the Conservative leader said before pointing to real problems in the country. “But, when he says that Canada is broken, that’s where we draw the line,” Trudeau said. “Let me be very clear for the record: Canada is not broken.”

The track record of Trudeau’s own administration suggests otherwise.

Canadian healthcare costs are rising. At least five million Canadians don’t have a primary care physician. Before the COVID-19 pandemic ever started, more than a million Canadians were on waiting lists. According to estimates, COVID has caused 21 million patient services (surgeries, screenings, and diagnostic procedures) to be delayed in Ontario alone.

And where even to begin with the crumbling Canadian economy? The average Canadian’s existence is currently defined by historically high unemployment rates, expanding public debt, inflation, and rising interest rates. There are numerous problems facing the country right now, including those with housing, food, and health. Because of their Prime Minister’s credulity, the unlucky Canadians have gone through severe pain.

For almost a year, the Canadian passport system has been a complete shamble. We’ve all witnessed the lengthy lineups outside of businesses and heard the terrifying tales of folks who applied months in advance but were denied travel. The immigration department was recently boasting of processing a record number of applications but, overall, there remains a backlog of more than 2.5 million people in the system. The government’s own website states that the processing time for a skilled tradesperson is up to 62 months, that’s more than five years and that is a so-called express entry.

Jaded, underfunded, understaffed, and dogged by controversy, the Canadian military is in a terrible situation, courtesy of Trudeau’s lack of administrative skills. The recent report from federal Auditor General Karen Hogan into COVID-19 spending found massive waste. “We found that overpayments of $4.6 billion were made to ineligible individuals, and we estimated that at least $27.4 billion of payments to individuals and employers should be investigated further,” Hogan said.

That brief summary of the federal government’s track record reveals a dysfunctional system, but Trudeau and his crew want you to believe that things have never been better. “It feels like everything is broken in this country right now,” Poilievre said just over a month ago in Vancouver.

He went on to talk about inflation, the high cost of housing, the tent cities that have popped up across the country, record foodbank use, increasing taxes, the government’s inability to properly deal with Chinese interference in our elections, and more. It was this that Trudeau was dismissing but the Conservative leader is right.

Trudeau’s years in the spotlight have solidified popular conceptions, whereas Poilievre’s perceptions have not yet converged. If anything, his numerous detractors may be positioning him for a more favourable public perception than he could ever create on his own by condemning him. The upcoming federal election can serve as a reality check for the egotistical, pompous Liberal PM, with Poilievre leaving no stone unturned to be in the good eyes of the Canadian populace.