Haftar calls the shot for “Election opportunity” in Libya 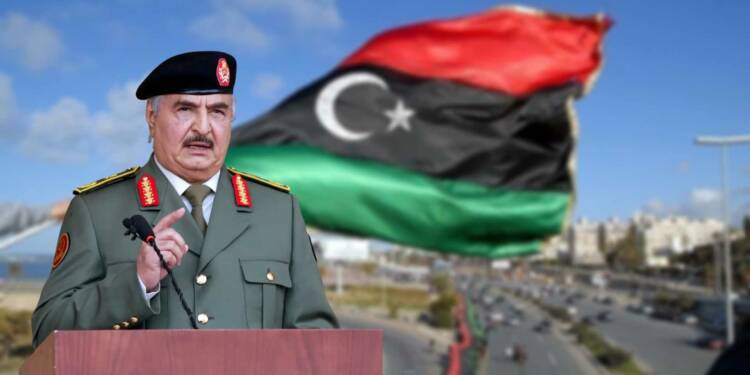 The West has been calling for elections in Libya for long now. The crisis in Libya began when a NATO-backed uprising toppled Muammar Gaddafi. As a result, the country was split into rival governments one in the east, backed by Field Marshal Khalifa Haftar, and an administration based in Tripoli, headed by Abdul Hamid Dbeibeh.

The regime headed by Dbeibeh is backed by the West whereas Haftar is supported by Russia. Ever since the West realised that it is becoming increasingly difficult for it to install its puppet regime in all of Libya, it has become desperate and is calling for elections in the country. Although attempts to hold elections have failed last year. However, now Haftar has shown who the real boss is, as he has announced the “final opportunity” to hold elections in Libya.

Despite many calls for holding elections by the West or the UN, the elections weren’t conducted in Libya which has been facing a massive political crisis since a decade, thanks to military intervention of the West. However, now the Libyan National Army (LNA) of commander Khalifa Haftar has announced “a final chance” to draw up a road map for elections.

Haftar addressed Libyans in the second largest city of Benghazi, home to his forces, on the 71st anniversary of independence. He said, “The General Command (of LNA) announces a final opportunity through which it will draw a road map and hold elections,” as per a report.

The NATO-backed uprising that ousted Gaddafi led to a 2014 split between the warring eastern and western factions.

The Eastern leader Haftar waged a war on factions in the west after 2014, including a 14-month offensive to capture Tripoli.

Khalifa Haftar even ordered his troops to capture Tripoli from the Government of National Accord (GNA) which is recognised by the UN in order to bring stability to the country but was unsuccessful.

Since then, the Western countries like the US, UK, France, Italy, Germany and most importantly the UN have called for holding elections in Libya, however it has never happened.

Although the West would prefer to install its puppet Dbeibeh, however, this dream of the West is now becoming next to impossible. We at TFI explained earlier, that there is possibility of Gaddafi’s son Seif-al-Islam running for President, who is backed by the Haftar government and also enjoys popular support in the country.

In this backdrop, UN sensed that the odds are no in its favour and thus it even threatened that if elections are further delayed it will lead to the partition of the country. The West realised that if Seif or Haftar comes to power, it will foil their sinister plans. Thus the West’s intention was to somehow try to rig the polls which will benefit their puppet Dbeibeh.

Read More: America’s 11 years long planning in Libya is about to be blown up

Now, Libyan National Army (LNA) of eastern commander Khalifa Haftar, by announcing a “final chance” to hold elections has shown the UN that who holds the real power in the country. As attempts to hold elections have failed in the past, many Libyans came to believe that their political leaders are unwilling to find a way out of the endless political logjam. Now, Haftar has sent a message that he wants to end the political crisis in the country and bring long-term stability and security through elections. Free and fair elections in Libya without any outside interference will hopefully mark a new era for the country and Haftar seems to be ready to take on the challenge.

Is Spain denying all sort of assistance to Cuba at EU’s behest?