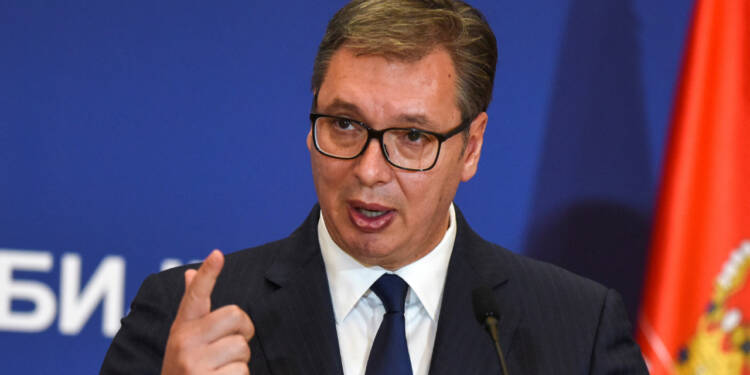 Serbia-Kosovo border tension: Serbia is in mission mode. Nothing can deter the south-eastern European country that is known for its determined and independent spirit. This spirit has been evident in recent years as Serbia has refused to bow down to external pressure from the West.

This time too, Serbia rather than bowing down has given an earful to the West. Consequently, Serbia has taken the first step to take back Kosovo. According to the news website Pink.rs on Sunday, a number of Western nations have “sent an ultimatum” to President of Serbia Aleksandar Vucic requesting that Serbs in the northern part of breakaway Kosovo halt their standoff with local authorities.

The report says that diplomats of the Quint group, which includes the US, UK, France, Germany, and Italy, are urging the removal of barricades in the area within 24 hours. According to reports, if Belgrade disobeys, the Western powers will permit Kosovo’s ethnic Albanian prime minister, Albin Kurti, to attack neighbourhood Serbs. Kurti had previously stated, “The removal of these barricades cannot exclude casualties.”

In response, Serbia’s Defence Minister Milos Vucevic stated on Monday that the Serbian armed forces were on “the highest level” of alert, underlining the deteriorating relations between the Balkan nation and neighbouring Kosovo due to recent shootings and blockades.

Read More: Ursula’s Serbian mistake has the potential to turn Europe into a searing Inferno

On December 10, Serbia in northern Kosovo raised barricades in opposition to the detention of a former police officer who was suspected to have been involved in attacks against police officers of ethnic Albanian descent.

According to KFOR, a NATO-led peacekeeping force, blockades have appeared at the same time as an increase in shootings, the most recent of which occurred on Sunday. He continued by saying that President Aleksandar Vucic has directed the expansion of the special armed forces from its current 1,500 members to 5,000.

Serbia’s interior ministry also announced that “all units (will) immediately come under the command of the chief of general staff”.

Following General Milan Mojsilovic’s dispatch to the Kosovo border on Sunday, Vucic issued these orders. Mojsilovic said, “The situation there is complicated and complex.”

Since hundreds of ethnic Serbia employees in the Kosovo police and the judicial branch, including judges and prosecutors, went on strike in November, the region of northern Kosovo has been particularly tense. They were opposing a contentious policy that Pristina subsequently overturned that forbade Serbs in Kosovo from using licence plates issued by Belgrade.

Read More: Hungary and Serbia now have a Russia Policy independent of the EU’s machinations

Further, the biggest Serb political party announced it will boycott the elections after a great uproar was sparked by Pristina’s intention to schedule the local elections on December 18 in towns with a Serb majority. Kosovo, a territory dominated by ethnic Albanians, was formerly a province of Serbia. Then after, Kosovo unilaterally proclaimed its independence in 2008.

While Serbia has depended on Russia and China in its attempt to maintain its claim to the province, the United States and the majority of the European Union nations have recognised Kosovo’s independence. The recent moves are indicative of commitment of Serbia to its own autonomy and its claim on Kosovo to be dictated to by the West.

Serbia’s refusal to bow down to the West is a testament to the country’s determination to remain independent and to pursue its own foreign policy objectives. Serbia has made it clear that it will not be dictated by any external force and will continue to stand firm in its convictions.