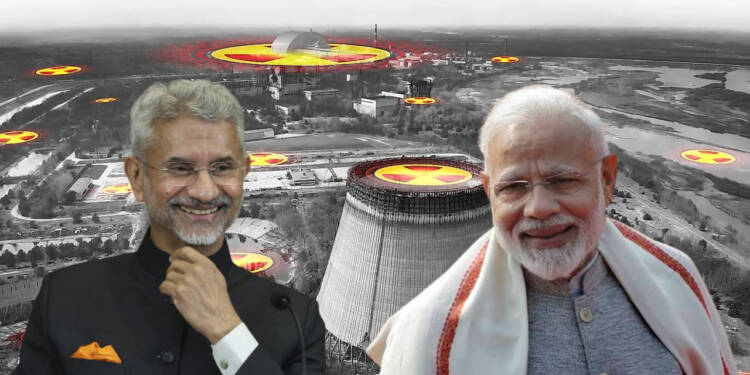 Zaporizhzhya nuclear plant attack: What comes to your mind when you hear about Chernobyl disaster? The movies that you would have watched on them must have told you everything about the catastrophe. A similar nuclear tragedy was about to wreak havoc in Europe. A country more than 6000 kilometres away from Europe prevented ‘another Chernobyl’ in Europe.

It’s not Canada and certainly not the USA. It’s India. As of 2023, Chernobyl was the largest known radioactive emission event in the world. After the disaster, radioactive substances were deposited in open areas like lawns, parks, roadways, and building roofs. Additionally, due to the accident’s radiation exposure, some illnesses like eye cataracts, cardiovascular disease, psychological side effects, birth defects like hydrocephalus, and an increased chance for some cancers like papillary thyroid cancer and chronic lymphocytic leukaemia became widespread. This only applies to individuals; Chernobyl’s consequences on wildlife, vegetation, and the ecosystem are incalculable.

The disaster incurred huge financial costs for USSR and surrounding countries. A report by USC Institute for Global Health said that the disaster exposed 10 million people to nuclear radiation and has cost roughly $700 billion over the past 30 years.

A similar tragedy was about to happen in Europe at Ukraine’s Zaporizhzhya Nuclear Plant. The Ukraine war has been shrouded in allegations by both sides of committing war crimes against each other.

Read More: And India beats the hell out of China yet again at the Indo-China border

Russia has continuously controlled the nuclear power plant after its troops took over the area for several months. Then, in August, shelling on the power plant damaged three radiation sensors and disrupted the plant’s regular operations. Similar attacks followed in the following months. In the meantime, Ukraine continued to chastise Russia for the bombing and waging a nuclear terror. The same comments were echoed in other Western nations too.

The situation was so volatile that at any moment, the Zaporizhzhya could become another Chernobyl. Now, India’s External Affairs Minister S Jaishankar has said how the country defused the tensions between the two hostile neighbours.

In response to a query about the war in Ukraine, S. Jaishankar stated in an interview with the Austrian newspaper ‘Die Press’ that India has assisted in defusing the situation and is willing to do more. He said, “If we can help, we stand ready. And we have already helped – very quietly on the grain deal, for example. We also tried to defuse the situation around the Zaporizhzhia nuclear power plant.”

If we talk about food, India also played a big role there. Following months of extensive discussions, the grain agreement was finalised in July with the primary goal of facilitating the export of around millions of tonnes of wheat, maize, and other grains from Ukraine. The agreement was viewed as essential for addressing food shortages and preventing famines in several nations.

When asked why India hasn’t made news for negotiations while Turkey has gotten all the credit. Jaishankar said, “No. But it’s not a question of who gets the credit as mediator and makes the headlines for it.”

The deal which was negotiated between Russia and Ukraine is a positive step forward in resolving the conflict and is also a testament to India’s commitment to global peace and security.